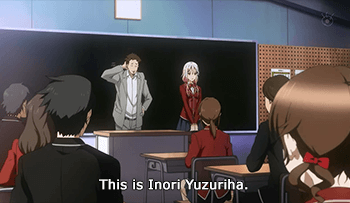 It's only a coincidence that the Idol Singer whom Shu is a fan of transferred to his class.
Jerri: Speaking of cute, there's this new kid at school...
Sara: New? I don't like the sound of that.
Jerri: He's really nice!
Sara: Most new people are, until provoked. And then they turn out to be... different.
—Strangers with Candy
Advertisement:

If a show has scenes featuring a school, the easiest way to drop a new character into the cast is to have that character enter as a transfer student. This is usually done by the Second Episode Morning. If the transfer student is the main character, the series will usually begin on his or her first day at the new school and deal with his struggle to make friends. This will always happen around mid-semester, so the other characters can exposit at them, showing them the cliques at school, the teachers to favor, and the nuances of the plot.

Often this ignores the inherent problem of characters with no credentials or information (since a lot aren't even human) being able to sign up for a school within a week or so after getting the idea. See Undead Tax Exemption.

This is a common way to introduce the mysterious stranger who'll become a character's Magical Girlfriend. Conversely, it's a way to have a character who is initially severely irritating to another to force them to deal with each other. In both cases, they'll end up sitting next to each other.

Sometimes, the new transfer student will get an Early-Bird Cameo, usually in the form of the main character bumping into them before school starts, one way or another.

Note how long they wear their old uniforms tells whether they assimilate. Especially if the new school doesn't have uniforms. Someone Expelled from Every Other School will likely end up as one of these.