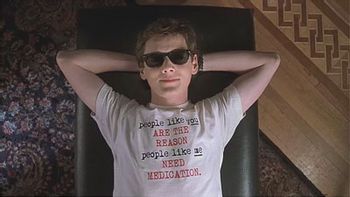 Charlie Bartlett (Anton Yelchin) just wants to be popular. After all, if that's not the point of High School, what is? Unfortunately, his attempts at popularity haven't succeeded in the past, and he's just been kicked out of yet another boarding school. What's a guy to do? Why, go to public school, of course!

Between taking care of his depressed, alcoholic mother and getting his head flushed down the toilet, Charlie's first day isn't much to brag about. So he visits the therapist his family keeps on retainer, who promptly diagnoses him with ADD. Only one problem — Charlie doesn't have ADD. And Ritalin acts rather like speed. After one crazy, drug-fueled night, Charlie hits on a new premise. He can sell the drugs, teaming up with the school bully and founding a business in the process. But Charlie doesn't stop at selling the drugs. He opens up his own psychiatric practice, operating out of the school's bathroom.

The directorial debut of veteran editor Jon Poll, with a supporting cast including Robert Downey Jr., Kat Dennings, Hope Davis, and Tyler Hilton, this 2007 film is not quite a comedy, and doesn't flinch at examining the consequences of Charlie's actions, many of which are unpleasant.