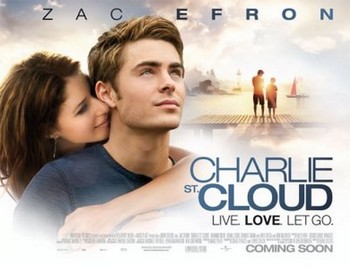 Based on the novel by Ben Sherwood, The Death and Life of Charlie St. Cloud.
Advertisement:

Charlie St. Cloud, played by Zac Efron, is originally a boy with many dreams and aspirations, as well as a close bond with his younger brother Sam. However, after "borrowing" a car leads to a major accident, that bond is put to the ultimate test; Charlie's near-death experience leaves him able to see ghosts, including his brother's, who did not survive the crash. Ridden with guilt and clinging to an old promise, Charlie gives up his old dreams and grows up to be the caretaker to his hometown's cemetery, so that he can spend time with his brother's ghost every single afternoon. But when a yachtswoman named Tess Carroll enters his life, who may be a greater enigma than she first appears to be, Charlie must choose between clinging to his past or embracing the future.