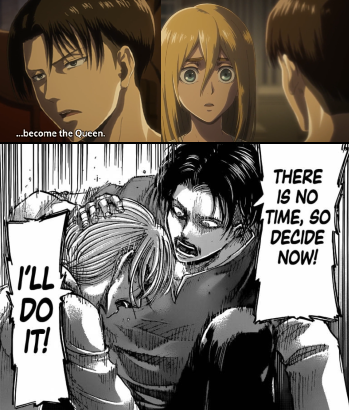 From threatening and pressuring her to ordering her nicely.
"Holy crap! A ballad already?! And such a bold departure from the original source material!"
— Betelgeuse, Beetlejuice
Advertisement:

When a work is adapted (whether to another medium, another culture/demographic, or both), you can safely assume that something from the original work will be changed in the process. Maybe characters are added, combined, split up, or omitted; maybe someone lives who originally died or vice versa, or maybe the whole thing is set in a completely different city/country/planet. The reasons for these changes can be as varied as the changes themselves, ranging from Artistic Vision to Executive Meddling to the constraints of the medium. Whatever they may be, expect cries of "That's not right at all!" from devoted fans of the original whenever these crop up. Accumulating enough of these may result in Adaptation Decay, at which point the adaptation starts to lose its resemblance to the original altogether.

Super-Trope to much, but not all, of the Media Adaptation Tropes index.

Please note that faithful adaptations can exist, or at least adaptations that don't directly contradict the source material in any way (e.g., by using Happily Ever Before on a work with a Downer Ending). Also, change is not necessarily a bad thing, and can make a work more accessible to other people or even iron out the kinks in the original work (such as an Adaptation Distillation, which seeks to make a more expansive/convoluted work easier to grasp).