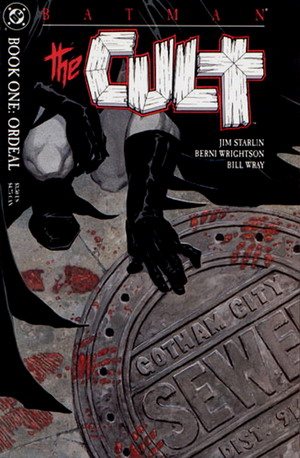 "There's something very scary going on out there."
"The Deacon broke me, Robin. He starved, drugged, and tortured me... brainwashed me. Blackfire convinced me his twisted outlook on life was right. I just wasn't strong enough to resist him."
— Batman
Advertisement:

Batman: The Cult is a 1988 four-issue mini-series written by Jim Starlin, illustrated by Bernie Wrightson, colored by Bill Wray and edited by Denny O'Neil. The series tell how a man, Deacon Blackfire, has created a secret underground cult in order to take over Gotham. He also kidnaps, drugs, and converts Batman in order to use him against the very city he swore to protect.

Batman: The Cult provides examples of: