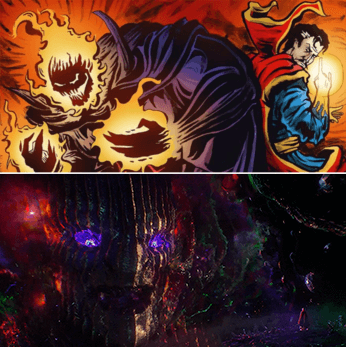 When a character is adapted from their source material to another form of media, oftentimes alterations are made to their abilities, origins, and more in order to make them better suited to the new take, or simply because it's cool. Normally, these changes aren't too drastic, or even are more subdued in an attempt to make the work more 'realistic' by having their unusual characters be more grounded.

This trope is not for such adaptations.

While in the source material a character may have been a simple, easy-to-understand monster, or wizard, or what have you, in the adaptation they are far from ordinary. For example, characters who were simply a man with superpowers may become a Humanoid Abomination, either to make the audience afraid of his powers, or even as a way to ''explain'' his powers. Sometimes it's a case of Ascended Fridge Horror, and sometimes it's just the adaptation being Darker and Edgier... that is, if the eldritch nature of the adaptation has a basis in the original work at all, and isn't just the new author completely changing things up.