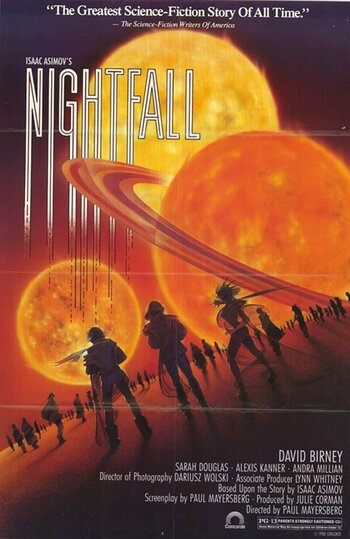 A 1988 Science Fiction film (80 minute duration) directed by Paul Mayersburg, he based his screenplay on the Novelette "Nightfall (1941)" by Isaac Asimov.

The movie opens with a Montage establishing the white, red, and yellow stars around a brown desert planet. Narration (by James Barry Blakely) and a Montage of characters establishes Sor (Alexis Kanner), the Blind Seer, and Aton (David Birney), the city leader and scientist, as well as their conflict, which smoothly segues into Sor's archeological discovery; a sealed metal casket he claims dates from a mythical "eighth nightfall". Zol (Russell Wiggins), Sor's assistant, shouts at Bet (Starr Andreeff), Aton's daughter, who has been eavesdropping during their discovery, that this is proof of what the Book of Illumination claims.

Ana (Andra Millian), known as "that woman" for most of the film, has walked into the city from apparently nowhere and Aton has been mesmerized by her. Aton's supporters kidnap her and exile her to the desert to get Aton to focus on his duties as city leader. Roa (Sarah Douglas), Aton's ex-wife, has joined Sor's religion. He elevates her to his level by having hawks peck out her eyes and teaching her to read the Book of Illumination. Boffin (Susie Linderman) has been working on a new type of telescope, one that makes sounds based on how far away objects are. With this "telescope for the blind", she discovered the "dark sun", a new celestial body alongside the known white, red, and yellow suns.

Tensions rise, crowds of people grow frightened of the growing cold, and the two city leaders fight frequently. The only thing that everyone agrees on? Nightfall is coming, and it will be The End of the World as We Know It.