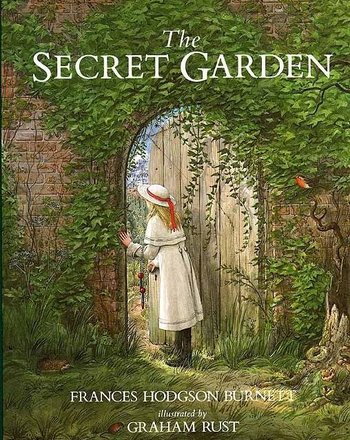 First published in 1911,note in book form — it was actually first published as a magazine serial in autumn 1910, with installments continuing into 1911 The Secret Garden, by Frances Hodgson Burnett, is a children's novel and has since been adapted into several television and movie versions, as well as a musical and an anime series.

The central narrative follows a young English girl named Mary Lennox, who, at the beginning of the story, has been raised entirely by servants in India; her neglectful parents are too self-absorbed to even notice her, and she's grown into a major Spoiled Brat. When a freak accident — originally a cholera epidemic but an earthquake in some adaptations — orphans her, she is sent off to England to live with her reclusive, mysterious uncle, Archibald Craven. Little does anybody know that her presence will transform the place, and it, in turn, will transform her.

The book is in the Public Domain and available for legal download.

There is even a free Audiobook available at Librivox.

The various adaptations have included:

Other adaptations contain examples of the following tropes: