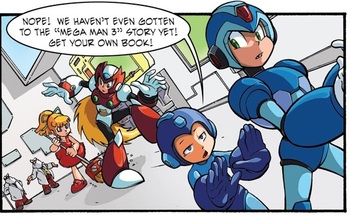 Mega Man 4 couldn't be adapted, but X and Zero luckily were.
Nomura: We are remaking Final Fantasy VII and I want to you to go back to be a dorky asshole again.
Cloud: That's the best thing I've heard in 23 years. But that means I have to fight Sephiroth again, right?
Nomura: Yeah. And also this will be episodic games.
Cloud: Oh good. At least I don't have to see him that much in the first game right? ...Right?
Nomura: Um...
— Cloud VS Sephiroth in a nutshell

Whenever adaptations and remakes of earlier works are created, the writers of adaptations/remakes often have to tell the same basic story as the original work in a reduced span of time and also have to alter elements to fit the new medium. Sometimes this leads to stuff being introduced relatively earlier than the original brought them into the picture. This can apply to characters, tech, plots, almost anything, but the basic principle is the same regardless.

The other reasons adaptation makers will employ this are these: An Iconic Sequel Character(s) will be the beneficiary(ies) of this trope both for the aforementioned narrative purposes and also to appeal to fans of the source material. Also by having characters appear earlier, they can be present when and where they weren't and thus make some changes so as to avoid being a complete retread.

This is easier to see when elements are introduced in a different order than in the original: whichever element(s) appear first become examples of this trope. Though choosing to have certain characters and objects that tie in to the earlier introduced character Adapted Out can also qualify for this trope.

Note: Adaptations that feature the same characters (including most of their associated personalities) and objects (with the associated appearances and functions) as the source, but have a plot and/or backstory that are invented whole cloth are not this trope. Therefore adaptations in question must be of Types 5-3 on the Sliding Scale of Adaptation Modification to qualify.

Also for the benefit for those who are not knowledgeable of whatever works that are cited, please include specific as possible references in order to demonstrate how an example applies (e.g. "Bob didn't appear until episode 24 of the 26 episode long (92.3% into the plot) TV show, but arises in the beginning of the close of the film adaptation's first act of three acts (33% into the plot)." or "In the comics Bob was introduced well after that of his previously established mentor Alice, but in the movie he is introduced without Alice's existence being established").

Compare Canon Immigrant (where a character introduced in a non-canon offshoot of the original source wasn't intended to be part of the main work, but is later incorporated, and retconned to be involved in prior events, due to Popularity Power), Ascended Extra (in which a character in the source material isn't crucial to the plot, but in the adaptation is given more prominence and involvement) and Early-Bird Cameo where a character appears earlier than their introduction in the same work or series. Adaptation Origin Connection is a related trope of this. The inversion of this is Adaptational Late Appearance.

In Anime, which is generally a verbatim adaptation of a manga or light novel series, expect this to be accompanied by Drop-In Character, Your Door Was Open, Stealth Hi/Bye, Offscreen Teleportation, and related tropes. That way, the screenwriter can abruptly insert them midway into scenes they weren't originally part of, then have them leave early so the dialogue from the source material can resume with minimal changes.

Examples, sorted by the medium of the adaptation: