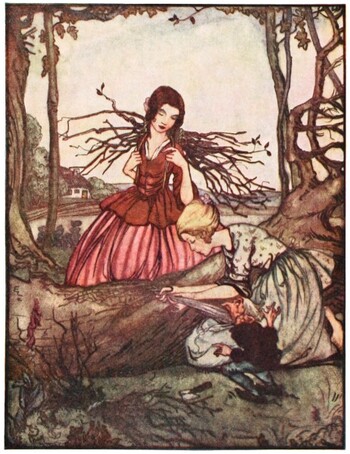 A poor peasant woman lives in a cabin in the woods. She grows two rose-trees in front of her house, one with white roses and one with red. When the flowers bloomed she had two children, both girls. She named them both after the trees, Snow White and Rose Red respectively. They have an adventure involving an evil dwarf, a bear that turns out to be an enchanted prince, the enchanted prince's enchanted brother, and, of course, eventually, live happily ever after.

by Gina Biggs of Erstwhile, and featured in an episode of the anime series Grimm's Fairy Tale Classics.

That Snow White has nothing to do with this story. The German versions of their names are spelled slightly differently (Rose Red's sister is Schneeweißchen; the seven dwarfs's boarder is Schneewittchen). Neither does "Snow-White-Fire-Red".

"Snow-White and Rose-Red" contains examples of: