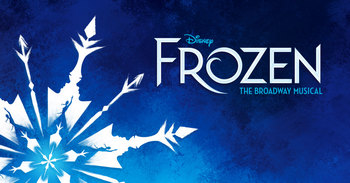 Following the success of Frozen on the big screen, a Broadway musical adaptation began development back in 2014, a mere year after the release of the original movie. With Jennifer Lee (script writer and co-director of the movie) returning to write the book and Kristen and Robert Lopez returning to pen 13 brand new songs, the show premiered in Denver for a 2017 preview run, and officially opened on Broadway on March 22, 2018. Due to the COVID-19 Pandemic, Disney suspended its performances because of Broadway's shutdown from COVID-19 and would not resume performances after the shutdown was lifted, effectively closing the musical on March 11, 2020. However, the national tour was planned to continue when touring shows became feasible again, and eventually restarted in September of 2021.

While it has a few modifications to better fit the stage, the musical closely follows the film in terms of story, but the new stage-exclusive songs help give us a better understanding of the inner struggles that our main characters go through, shedding some new light on a familiar story that audiences haven't seen before.

Not to be confused with the shorter Frozen—Live at the Hyperion stage musical at Disney California Adventure.

Note: Spoilers for the original movie are unmarked.