Your Door Was Open 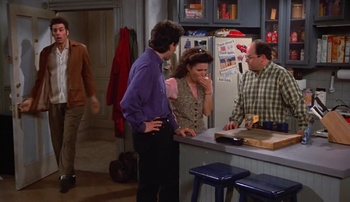 It's a show about nothing. No hugging, no learning, and no knocking before coming in.
"Jane, we've talked about this! You can't keep walking into our flat uninvited — this is not an American sitcom!"
— Steve, Coupling, a British sitcom
Advertisement:

A common situation in a TV show with limited time to show events, where a character will suddenly appear in another character's home with no explanation. It can be interpreted as merely a shorthand to indicate that the character has in fact knocked and been let in but the scene is too boring to air. However, the trope often appears in contexts where that should not be possible, like when the person entering the house walks in on someone's private affairs, or is a villain, or is out of favor with the resident and walks in just to berate him, etc. Why nobody ever, at the very least, locks their door when they want to be alone is a great mystery.

This is particularly common in Role-Playing Games, which often allow the player character to simply wander into anyone's home at whim. Depending on the game, reactions can range from the house's occults being enraged at your intrusion to your being free to chat with whoever's in there without, for the most part, them seeming to mind your player character's presence at all.

Not to be confused with There Was a Door.

The Drop-In Character does this all the time.