Spoilers Off for MK1, MK2, MK3 and MKM:SZ. You Have Been Warned. 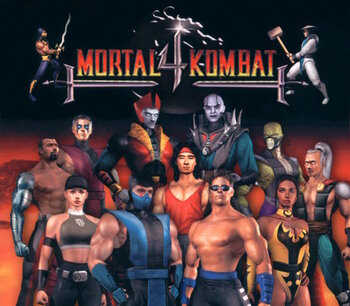 "Thousands of years ago, in a battle with the fallen Elder God known as Shinnok, I was responsible for the death of an entire civilization. To rid all realms of Shinnok's menace, I waged a war that plunged the Earth into centuries of darkness and banished Shinnok to a place called the Netherrealm. Now after Shao Kahn's defeat at the hands of the Earth warriors, Shinnok has managed to escape his confines of the Netherrealm. The war is now being fought once again...only this time...it can be won by mortals."
— These are the words of Raiden.
Advertisement:

After Mortal Kombat 3 and Mortal Kombat Mythologies: Sub-Zero, Midway decided it would venture into 3D — which gave rise to Mortal Kombat 4, released in 1997 for the Arcade, Game Boy Color, PC, PlayStation, and Nintendo 64.

Thousands of years ago, Raiden waged war against former Elder God Shinnok; this war ended an entire civilization, and Shinnok was later condemned to the Netherrealm. Bi-Han, the original Sub-Zero was deceived to free him, and years later, Shinnok allies himself with the villainous Quan Chi. With the help of Edenian traitor Tanya, the evil duo ascended to the Heavens and killed most of the Elder Gods. Raiden and the Wind God Fujin escaped, then gathered Raiden's most trustworthy allies in order to defeat Shinnok and his allies.

In order to test its "virgin" 3D engine, Midway released a "test game", War Gods, which was panned by critics and allowed Midway to learn from its mistakes before finalizing MK4. Midway changed the engine to allow only two slow movements on the z-axis (the side steps, which only worked to dodge beam-attacks), which made MK4 similar to previous games (and thus helped it to avoid hitting the Polygon Ceiling). MK4 also introduced the weapon fighting system to the franchise.

MK4 was updated with the release of Mortal Kombat Gold for the Sega Dreamcast in 1999, which brought back six older characters.

The game has the following trope examples: