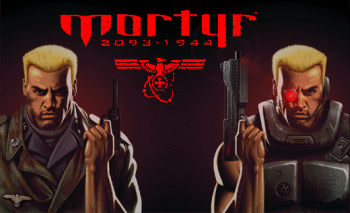 Set in Alternate History, the game begins in 2093, nearly one and a half century after an unexpected Nazi victory in 1945. The Nazis won the War in the course of a winter offensive that swept Europe, leaving four fifths of its territory under Reich control, and later the destruction of Moscow and occupation of Washington, DC. Such a victory was brought upon, it is said, by a Wunderwuffe of mysterious power.

However, as usual, the Nazi victory did not make the world a better place. No sir, by 2093, the totalitarian worldwide Reich is wrought by weather storms and seems to be nearing closer and closer to Armageddon. A political dissident, General Jurgen Mortyr, sends his son, Sebastian, back in time to discover what led to the Nazi victory - and stop it from happening, to prevent Armageddon.

The game itself is a fairly rudimentary shooter with so-so graphics. It's divided into two distinct parts: one set in World War II (passable) and one in 2093 (ridiculous). Panned globally, it was surprisingly well received in Poland itself, marketed as a global hit. May result in a So Bad, It's Good reaction in some.

There was also a 2005 sequel, Mortyr 2: For Ever, which completely ditched the time travel elements of the first game, and instead had a British paratrooper Sven Mortyr fight his way through the Nazis across several occupied countries in the search of his father, who was kidnapped to serve their latest superweapon project.