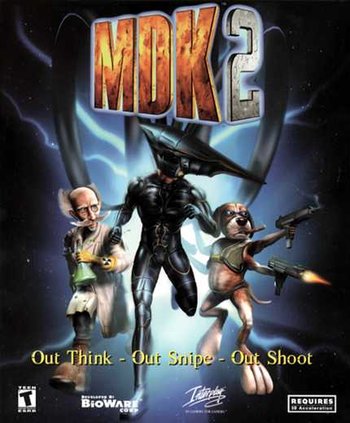 Kurt Hectic never wanted to be a hero.
Advertisement:

MDK2 is the direct sequel to the original MDK released in 2000 by established RPG developer BioWare Corp. of Edmonton, Alberta, Canada, and was released for the Dreamcast and PC originally, but was eventually re released for the PS2 as MDK2: Armageddon.The game was re-released on WiiWare,

and an Updated Re-release was also released for the PC as well.

MDK2 begins right where the last game left off, where reluctant Hero Kurt Hectic — a janitor employed aboard Dr. Fluke Hawkins' orbital space station, the Jim Dandy — is sent to deal with the last minecrawler in Canada instead of enjoying his well-earned break from fighting off the last batch of minecrawlers. After killing the pilot, Kurt is promptly kidnapped by a rather huge alien called Shwang Shwing. From here, the characters Kurt Hectic, Fluke Hawkins, and Hawkins's assistant/guard — a six-legged, bipedal robotic dog named Max — take turns saving one another, until they finally confront the Emperor of the alien empire, Zizzy Balooba.

Each of the three characters has a different style of play, such as: