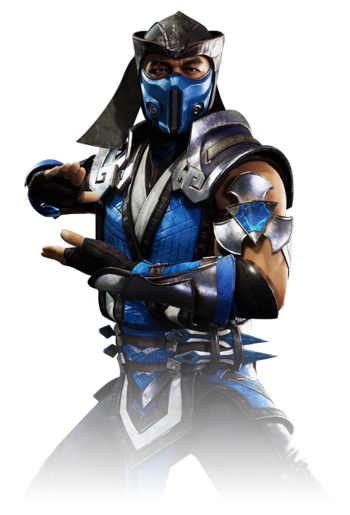 "For the Lin Kuei!"
Debut game: Mortal Kombat II (Daniel Pesina)
Other appearances: Mortal Kombat 3 (John Turk), Mortal Kombat 4 (John Turk), Mortal Kombat: Deadly Alliance (John Turk), Mortal Kombat: Deception (John Turk), Mortal Kombat: Armageddon (Tom Taylorson), Mortal Kombat: Shaolin Monks (Rom Barkhordar), Mortal Kombat vs. DC Universe (Jim Miller), Mortal Kombat 9 (Jim Miller), Mortal Kombat X (Steve Blum, English; Sebastián Llapur, Latin American Spanish), Injustice 2 (Steve Blum, English; Sebastian Llapur, Latin American Spanish; Jörg Hengstler, German; Jérémie Covillault, French; Charles Dalla, Brazilian Portuguese), Mortal Kombat 11 (Steve Blum and Dimitri Vegas, English; Tony Chung, Face Model; Sebastian Llapur, Latin American Spanish)
Advertisement:
Non-game appearances: Mortal Kombat: Annihilation (Keith Cooke), Mortal Kombat: Defenders of the Realm (Luke Perry), Mortal Kombat: Legacy (Harry Shum Jr.), Mortal Kombat Legends: Battle of the Realms (Bayardo de Murguia), Mortal Kombat Legends Snow Blind (Ron Yuan)
The sixth member of his family to bear the mantle of Sub-Zero, the warrior has become an active defender of Earthrealm from the forces of Outworld. A powerful Cryomancer able to create and manipulate ice at will, Sub-Zero became the Grandmaster of the Lin Kuei, aiming to rebuild it as a force for good in the world. His real name is Kuai Liang. Taking the name Sub-Zero after the death of his elder brother Bi-Han, the Lin Kuei sent him and fellow warrior Smoke into to Outworld during the second tournament. Their mission was the same as his fallen elder brother's, to assassinate Shang Tsung. He soon learned of Scorpion's grudge against the recently "revived" Sub-Zero. But when he showed mercy to a defeated foe, Scorpion eventually realized he was in fact his younger brother and spared him his elder's fate. Unable to kill their target but aiding the Earthrealm warriors against Shao Kahn, the duo returned home empty handed.
Advertisement:
Unfortunately, the Lin Kuei had acquired technology to enhance their warriors and desired Sub-Zero and Smoke to become cyborg assassins. The two refused and fled for their lives. Sub-Zero managed to escape, but Smoke was captured. He was marked for death whilst his friend was turned into a machine against his will. Smoke, Cyrax and Sektor were sent to eliminate him. When Shao Kahn suddenly invaded Earthrealm and claimed the souls of countless millions, as a chosen warrior he found himself one of the lucky few spared and joined Earthrealm's defense against Kahn. Convincing Smoke he had retained his soul and restoring his humanity the two defeated Cyrax and Sektor. Sub-Zero reprogrammed Cyrax to assassinate Kahn (a task he failed in) but Smoke was captured shortly before Outworld's defeat. Convincing an enraged Scorpion during Shinnok's war that he had no role in the murder of his clan or family, and with Quan Chi revealed as the true culprit, the Lin Kuei was finally freed from the specter's vengeance. In the events prior to Deadly Alliance Sub-Zero returned to the Lin Kuei and defeated Sektor for the leadership of the clan, claiming the power-enhancing Dragon Medallion in the process, vowing to reform the group into a force for good. When the Deadly Alliance struck he saw it as an opportunity to show the clan in a new light. Taking his new apprentice Frost with him, he aimed to aid Raiden's forces against the new threat. However, Frost's ambitions caused her to betray Sub-Zero, attempting to steal the Dragon Medallion from her master. Unable to handle its raw power, Frost was consumed by ice, with Sub-Zero blaming her failings on himself.
In Deception within a tomb in Outworld, he discovered his origins were that of a forgotten race known as Cryomancers. Laying Frost's body to rest and forgiving her treachery he donned an ancient suit of armor within the ruin and headed for an Earthrealm portal. He offered asylum to Sareena for aiding his brother in the past. Sub-Zero then found himself in direct conflict with his fallen sibling Noob Saibot and a reprogrammed Smoke during the events of Armageddon.
In Mortal Kombat 9, the younger Sub-Zero is actively seeking Scorpion for his brother's death, and so heads to Outworld with Smoke to seek him. He is also on the run with Smoke from the Lin Kuei, as they were trying to avoid being turned into cyborg ninja like Cyrax and Sektor before them. He eventually defeats Scorpion in the Outworld tournament, but as he is about to deliver the finishing blow, he is captured by the Lin Kuei to be cyberized. As a cyborg, he serves Shao Kahn’s forces for a while before being reprogrammed by Jax, thus having his free will back. He joins the Earthrealm defenders afterwards, and along with most of them, is killed by a powered-up Sindel. Sub-Zero is then resurrected by Quan Chi as a mindless revenant, regaining his human form in the process. He fights for the Netherrealm during the subsequent Earthrealm invasion as depicted in the beginning of Mortal Kombat X. In the aftermath of the war, he is restored to life by Raiden. As with the original timeline, he takes control of the Lin Kuei from Sektor, turning the clan into a benevolent force that aids Earthrealm in both MKX and 11. He also reveals the true murderer of the Shirai Ryu clan to Scorpion, ending their feud and forming a partnership.
Bi-Han can be found here; for tropes related to Cyber Sub-Zero, check the Mortal Kombat 9 character sheet.
open/close all folders
A-L
M-Z