Spoilers for the original timeline before Deception will be unmarked 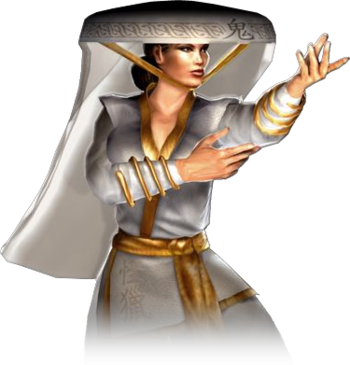 Debut game: Mortal Kombat: Deception (Johanna Añonuevo)
Other appearances: Mortal Kombat: Armageddon (Johanna Añonuevo)
Ashrah was once a member of Quan Chi's Brotherhood of Darkness, but she escaped after refusing to carry out orders. In her flight, she came across a sword called the Kriss that seemed to grant purification to whoever wielded it. Emboldened, she began slaying Neatherrelam demons with the belief that her soul would be purified and granted escape from the Neatherrealm. As such, she made it a priority to slay Noob Saibot.
Though she was unable to slay Noob, she eventually transcended the Neatherrealm. She was approached by ethereal forces with the task of becoming a champion by slaying various people of the vampire race. She did so, which earned the ire of Nitara. She joined the Battle of Armageddon to slay Nitara once and for all.
Dairou 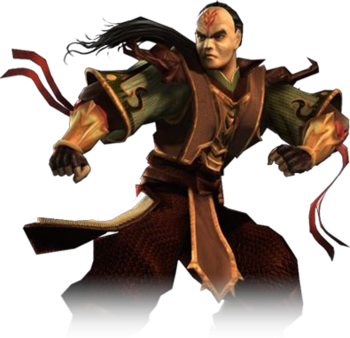 Debut game: Mortal Kombat: Deception
Other appearances: Mortal Kombat: Armageddon
Dairou was once an honorable guardsman from the highly advanced and pristine Orderrealm, which as its name suggests places law, order and structure prevail above anything else. He was discharged and imprisoned after he killed a man that murdered his family in a fit of rage, and was later imprisoned. After escaping and freeing a similarly imprisoned Shujinko, he became a mercenary for hire, with one his contracts ordering him to kill his former fellow guardsman Hotaru.
For reasons unknown, he and Hotaru would put aside their differences, and join the Battle of Armageddon.
Darrius 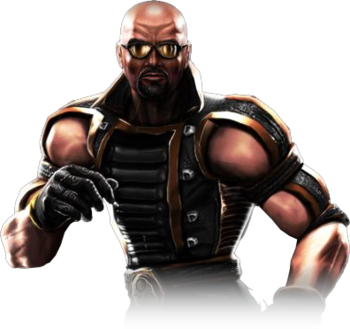 Debut game: Mortal Kombat: Deception
Other appearances: Mortal Kombat: Armageddon
Darrius, eventually tired and oppressed by the strict structures of his home of Orderrealm, instigated various riots and acts of terrorism to unsettle the establishment. One of these acts was to have Dairou's family murdered and lead to the chain of events that led to his discharge from being a guardsman and become a mercenary.
It was Darrius who hired Dairou on a contract to kill Hotaru, but the contract would not be enacted; all three of the Orderrealm denizens would join together in the Battle of Armageddon.
Advertisement:
Havik 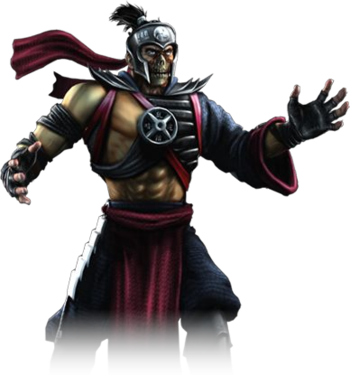 He's crazy! And for the same reason, you gotta like him!
Debut game: Mortal Kombat: Deception (Paul St. Peter)
Other appearances: Mortal Kombat: Armageddon (Paul St. Peter/Ryan Rosenberg)
Havik is from Chaosrealm which, as its name suggests, values disorder and chaos above all else. When Onaga returned and intended to use the Kamidogu to bring order across the realms, the Cleric of Chaos saw this as a threat and saw to it to halt the Dragon King's schemes. Aside from instigating chaos in Orderrealm, Havik was also responsible for saving Kabal from Mavado's attack, giving him the suggestion to revive the Black Dragon Clan. Havik intended to use the heroes to fight Onaga and distract them long enough to consume Onaga's essence and use the ability to resurrect the dead.
It is unknown if he succeeded in this, but he does show up alongside the Orderrealm denizens in the Battle of Armageddon.
He plays a role in the comic book prequel to Mortal Kombat X, as Reiko's adviser and the "Blood God" corrupter of the Kamidogu. Ultimately, he is decapitated by Hanzo Hasashi, with his head taken to the Netherrealm and subsequently crushed beneath Quan Chi's foot.
Hotaru 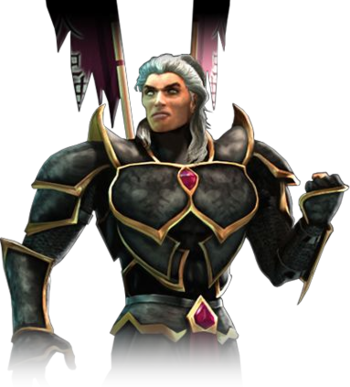 "There is an order to the universe... laws that all of nature must obey."
Debut game: Mortal Kombat: Deception (Paul St. Peter)
Other appearances: Mortal Kombat: Armageddon (Paul St. Peter)
Hotaru is a guardsman from Orderrealm. Hotaru takes order to an extreme level, to the point of zealotry, and is willing to resort to extreme measures to uphold it. One of these being to ally himself with the resurrected Onaga, whom Hotaru sees as the one to bring order to all realms. Under Onaga, Hotaru had two goals: defeat the Cleric of Chaos Havik who was spreading discord, and apprehend Sub-Zero and bring him before the Dragon King.
Hotaru would eventually join the Battle of Armageddon, being the first to draw blood by slaying Li Mei.
Kira 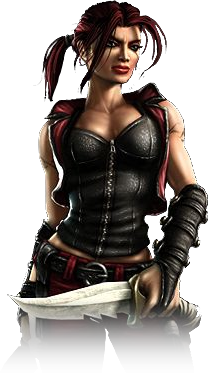 Debut game: Mortal Kombat: Deception (Christine Rios)
Other appearances: Mortal Kombat: Armageddon (Christine Rios)
In the mountains of Afghanistan, there was a man who was selling weapons to terrorist organizations. During a deal that went wrong, that "man" was revealed to be a woman, named Kira. Kira fended off her attackers and was victorious, and to congratulate her was Kabal, leader of a reformed Black Dragon Clan. Impressed by her skills, Kabal offered Kira membership, which she gladly accepted. She and eventual recruit Kobra help carried out the new Black Dragon's goal of total anarchy.
Kira and Kobra would be fought by Taven on his quest, and the two fought alongside Kabal and original Black Dragon members Kano and Jarek in the Battle of Armageddon.
Kobra 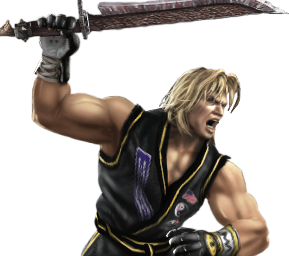 Any resemblance to Ken Masters is purely coincidential.
Debut game: Mortal Kombat: Deception
Other appearances: Mortal Kombat: Armageddon (Alex Brandon)
Kobra was once a proficient fighter in New York, but years of fighting in dojos and mock fights made him wonder just how useful they were. He started beating up street thugs, but the bloodlust eventually led him to killing his opponents and making him a wanted criminal. He eventually got the attention of the new Black Dragon Clan under Kabal, and he and Kira sprung him from the police and inducted him. Kobra worked with his new clan members in making the Black Dragon Clan a feared name.
Kobra would fight Taven during his quest, and Kobra would fight alongside the Black Dragon, old and new, in the Battle of Armageddon.
Shujinko 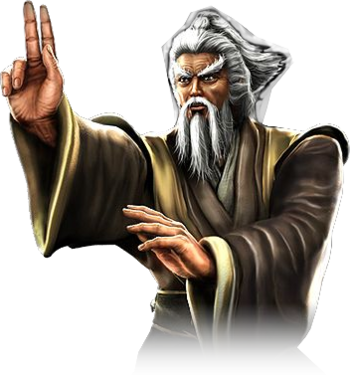 Debut game: Mortal Kombat: Deception (Max Crawford)
Other appearances: Mortal Kombat: Armageddon (Max Crawford)
As a youth, Shujinko dreamed of fighting in Mortal Kombat and defeating Shang Tsung. His chance for glory came when an entity known as Damashi, an envoy of the Elder Gods, was looking for a mortal with the courage and strength to find the six Kamidogu. Shujinko accepted, and, through the decades, looked for them. Armed with a power bestowed by Damashi to observe and wield the abilities of various kombatants, Shujinko traversed many realms and met many kombatants before obtaining the six Kamidogu. Shujinko however, had been deceived.
Damashi turned out to be the Dragon King Onaga, former emperor of Outworld. Onaga cast his pawn aside and took the Kamidogu for his own, intending to reshape the realms. Feeling immense guilt, Shujinko gathered remaining kombatants from the battle against the Deadly Alliance, helped them defeat Onaga, and banished Onaga's soul to the Neatherrealm. Shujinko would later partake in the Battle of Armageddon alongside many of the kombatants he has met throughout the decades.
In the rebooted timeline, Shujinko is head of the Kang Shaolin Temple, and in charge of guarding the Kamidogu of Chaos. Unfortunately, Havik deceives him into giving up his Kamidogu after convincing him that Raiden could not be trusted. Later, Raiden sends Cassie Cage to kill Shujinko in order to prevent him from waking Onaga and beginning the path towards Armageddon.
Advertisement:
Onaga 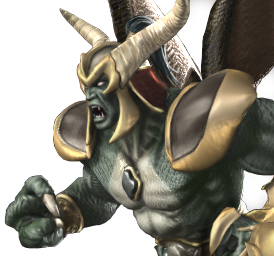 Debut game: Mortal Kombat: Deception
Other appearances: Mortal Kombat: Armageddon (Nigel Casey)
Onaga, also known as the Dragon King, was once the emperor of Outworld. His undead army of soldiers was feared by many as being unstoppable. His rule would come to an abrupt end when he was poisoned and killed by his chief adviser Shao Kahn. For the next millennium, Shao Kahn ruled outworld and Onaga was forgotten. His chance for a return came when, posing as an ethreal essence name Damashi, he tasked Shujinko with a false quest to find the Kamidogu and grant him power. At the same time, a delirious Reptile chanced upon a dragon egg that corrupted Reptile and allowed the soul of Onaga to inhabit his body. Revived, Onaga immediately went to reclaim his army and defeated the former Deadly Alliance of Quan Chi and Shang Tsung, and Raiden. He then revived all those killed by the former sorcerers and made them his slaves, and set about reconquering the realms.
Shujinko, feeling immense guilt for the deception, gathered as many remaining kombatants as possible and defeated Onaga together, exorcising him from Reptile and locking his spirit in the Neatherrealm. Shinnok, also banished to the Neatherrealm, promised Onaga freedom and reclaiming Outworld by informing him of the power that Blaze held, and Onaga, alongside a reluctant alliance of Quan Chi, Shang Tsung and Shao Kahn, escaped from the Neatherrealm and partook in the Battle of Armageddon. 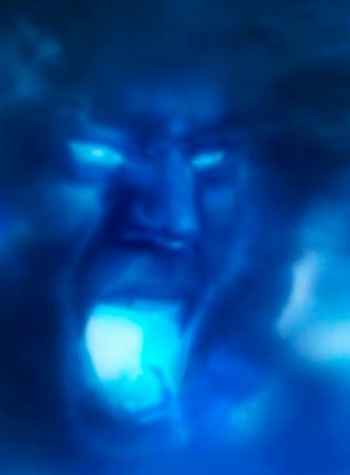