Advertisement:
Check the MK1 sheet for Kano, the MKII sheet for Jax, and the MK4 sheet for Jarek.
open/close all folders
Tremor 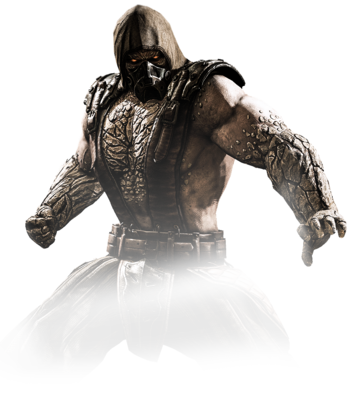 "Your death will satisfy my rage."
Debut game: Mortal Kombat: Special Forces
Other appearances: Mortal Kombat 9, Mortal Kombat X (Fred Tatasciore, English; Octavio Rojas, Latin American Spanish).
A mysterious, brown-garbed ninja employed by the Black Dragon as an arms dealer, Tremor possesses the ability to manipulate the earth. He was broken out during a prison riot by Kano, but was seemingly killed by Jax. Notable for appearing in a spin-off as a boss, the creators of the series considered implementing him into the series as a playable fighter, but never seemed to get around to it during the original timeline despite heavy demand. Fans speculated this likely had to do with the nature of his origin, as Special Forces was ill-received and seemingly subject to Canon Discontinuity due to a lack of references to it in later games, although Ed Boon refused to claim the brown ninja would never show up.
However, come the reboot, Tremor unexpectedly showed up as a bonus character during Challenge Mode for the PlayStation Vita port of Mortal Kombat 9, sparking renewed interest in the character. Finally, Mortal Kombat X revealed him as a DLC kharacter in his first fully playable appearance. In this new timeline, the events of Special Forces are ignored and Tremor serves Kano as an enforcer and arms dealer during the events of MKX and its prequel comic, albeit with some tensions brewing between the two...
Gemini