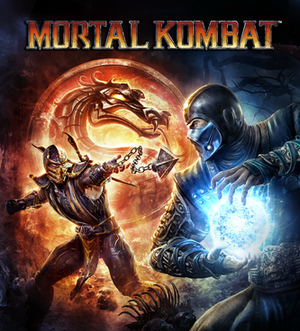 ROUND TWO! FIGHT!
"Our story has ended. Centuries of battle, meaningless. Shao Kahn has consumed Earthrealm. His victory must be undone. Armageddon, aborted. We will strike where he's vulnerable: the past.

The cost will be high. The sacrifices, unthinkable. Many will fall. Our tale must be retold."
— Intro movie, as told by Raiden.
Advertisement:

The game's story begins at the end of Mortal Kombat: Armageddon: Shao Kahn, who now rules over all realms, prepares to kill Raiden, the only other survivor of the apocalyptic battle. Before Kahn lands the final blow, Raiden manages to send a cryptic message—"He must win"—to his past self, who is now responsible for preventing Shao Kahn's ultimate victory. However, when so few words are used to convey something so critical, there is much room for alternate interpretations...

Mortal Kombat retells the events of the first three games of the franchise, but Raiden's decisions in the story leads to events occuring much differently than before. The game is also a return to the series' roots (as a 2.5D fighter) that includes numerous modern-day touches; new gameplay mechanics include the chance to use enhanced versions of special moves, Combo Breakers, and a highly-damaging X-Ray Move (which briefly shows the target's skeleton and other innards during impact). On top of that, the ludicrously bloody Fatalities (and Stage Fatalities) make their return—and they're all gorier than ever before.

In addition to its story mode, Mortal Kombat includes a tag team mode, a Challenge Tower (players must complete certain tasks in order to advance), and an online King of the Hill Mode akin to Super Street Fighter IV's Endless Battle mode.

As J. J. Abrams did with the 2009 film Star Trek, this game opens an Alternate Timeline in the Mortal Kombat franchise. The franchise's next installment, Mortal Kombat X, is a direct sequel to this game's storyline.

Other drops happen during the course of the story, which goes without saying.