While Quan Chi was originally introduced in Mortal Kombat: Defenders of the Realm, he's included here for the sake of narrative, as this is the game which introduced him to the series proper and explained his role in the main story of the games.

Shinnok and Quan Chi can be found here.
open/close all folders
Sareena 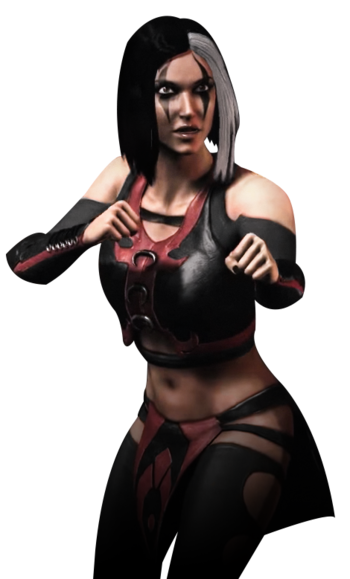 "I am not a being of Light. I am a demon of the Netherrealm, a servant of Quan Chi."

Sareena is one of Quan Chi's personal assassins. She and her two partners, Kia and Jataaka, were ordered to kill Sub-Zero before he reached Quan Chi. They were defeated, but Sub-Zero strangely spared Sareena's life. Later, as Sub-Zero battled Quan Chi, Sareena suddenly appeared and did a Heel–Face Turn by helping him in defeating the sorcerer. After expressing her desire to escape the Netherealm with him, she's shot in the back with a bolt of energy by Shinnok. She collapses into an enraged Sub-Zero's arms and seems to die...
... Turns out after the events of the game that the only thing Shinnok destroyed was her human form. In Mortal Kombat: Tournament Edition, it's discovered that her essence was banished as punishment for her betrayal, where she would suffer for years. Some time later, Sareena discovered the portal Quan Chi and Scorpion used to escape the Netherealm.
Shortly after regaining her human form, Sareena encountered the younger brother of the Sub-Zero she met years before. Sub-Zero granted her sanctuary with the Lin Kuei back on Earthrealm. In gratitude, Sareena pledged her loyalty to the clan, swearing to help defend it from its enemies.
In Armageddon, it is revealed that Sareena followed Sub-Zero into the Netherrealm, saving him from being killed by Noob Saibot and Smoke. She and Sub-Zero were victorious, but after the battle, Sareena lost control of her human form and returned to her true demon self. Thinking her to be a threat, Sub-Zero attacked and she fled, not wanting to harm him. However, she was later attacked by Noob Saibot, Smoke, and her former master Quan Chi, who demanded she provide them information about the Lin Kuei. At first, Sareena refused, determined to remain loyal to Sub-Zero. But Quan Chi then cast his dark sorcery upon her, returning her to her human form and then convincing her that she can never be good and that she is simply a pure evil demon. Swayed by Quan Chi's corruption, she agreed to serve him once again. However, she ended up recanting her allegiance when she was spared by Taven and would join the Forces of Light in the Battle of Armageddon.
In the rebooted timeline, she appears as an intelligence source for the Special Forces in the Netherrealm, and aids Jax in a fight against the revenants. She also shows up in Kabal's ending as his wife and the mother of his children. 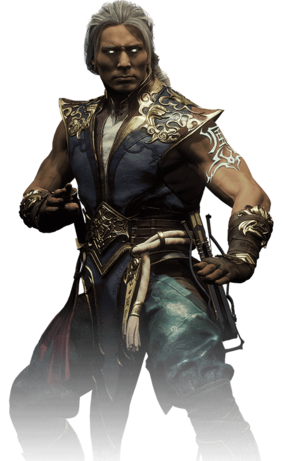 "How many mortals will die before this ends?"

Fujin is one of the elemental gods assigned by Raiden to guard Shinnok's amulet in Mythologies, and the first of them which was challenged by Sub-Zero. He returned in 4 as one of the Earthrealm gods not being destroyed by Shinnok. He assists Raiden in his battle against Shinnok, and after his defeat, he was ascended to the Earthrealm protector status, while Raiden (who chose him as the replacement) was re-promoted to the Elder Gods pantheon.
In Armageddon, he notices a behavior change in his old friend. While Raiden was, technically, in the good guys' side, he also gained a ruthless side after realizing that Humans Are Bastards and revived Liu Kang's corpse in order to send him to do massive manslaughter. In spite of this, Fujin allied with Kung Lao in order to find a way to save both Raiden and Liu Kang. He learns that Johnny Cage is trying to gather the Forces of Light, and there's also a mention of the brothers Taven and Daegon, whose family has been friends with Fujin over the years. Argus (their father) sent them on a quest which was corrupted by evil. Fujin then goes to search for both brothers, hoping to prevent their progress and learn the true purpose of their quest.
In the new timeline, Fujin cameos in Mortal Kombat X defending the Sky Temple with Raiden. In the comic series, he gets attacked by a Kamidogu possessed Raiden and sends Takeda to help Scorpion stop Havik. He does not appear in the main story for 11, but several intros grimly imply he was Killed Offscreen in the crashing of timelines by Kronika's forces. However, he returns in the Aftermath expansion as a playable character for the first time in over a decade and with a story role.
Advertisement:
Lin Kuei Grandmaster

Lucifer
A god or demon who previously ruled the Netherrealm before Shinnok was banished there and promptly took over.