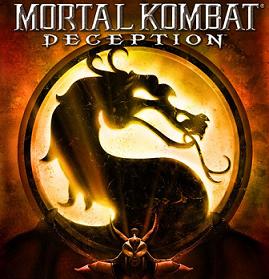 "I was the fool who brought him this power. Only I can destroy this threat, born of deception."
— Shujinko, the game's main character.
Advertisement:

Mortal Kombat: Deception is the sixth fighting game installment in the Bloody Mortal Kombat franchise. It was released for PlayStation 2 and Xbox in 2004 and for GameCube in 2005, and it takes place right after Mortal Kombat: Deadly Alliance.

At the end of that game, Shang Tsung and Quan Chi managed to bring back Outworld's ancient army. The opening cutscene brings us to them fighting Raiden. Once Raiden is down, they start fighting each other, with Quan Chi defeating Shang Tsung. However, while he was rejoicing with his victory, someone appears. It's Onaga, the resurrected Dragon King, who wants Outworld back. Quan Chi and Shang Tsung tried to bring him down, with Raiden joining them later. In the end, neither the three of them could stop Onaga, and Raiden, in a desperate move, tried to do his most dangerous move... which has proven to be fatal only for the trio, as Onaga managed to survive to that and without taking much damage. With Raiden and the Deadly Alliance gone, now there's only one ruler.

It turns out that, while the events of previous games were taking place, Onaga, disguised as an Elder God emmisary, tricked a youngster named Shujinko into getting six MacGuffins for him, across the realms. This, plus Reptile's body being used as a host, managed to bring back the Dragon King to life.

So, now, without any leader, and with five of the heroes (specifically Johnny Cage, Sonya, Jax, Kitana and Kung Lao) being killed in battle, Sub-Zero trapped in the Netherrealm, and his pupil Frost being... frozen, the survivors of the battle against the Deadly Alliance (Kenshi, Bo' Rai Cho, Li Mei, Scorpion and the aforementioned Sub-Zero) are on their own against the forces of Onaga, which included the Tarkatan army, led by Baraka. Raiden, corrupted by Onaga's magic, became disgusted with the humanity in general, and revived Liu Kang as a zombie, sending him to a massive manslaughter. Kang's spirit, however, stays with Ermac, to help him save his friends.

Deception follows the 3D path the MK series has taken with Mortal Kombat 4 and Mortal Kombat: Deadly Alliance. It also brought back the Stage Fatalities, which were absent in the previous installment, now doable even during the match, and increased the mayhem by adding several stages more than two traps, a Combo Breaker system, and a hara-kiri move, which the character can use to avoid the Fatality. And, as you've seen above, it's the first Mortal Kombat game which assumes that The Bad Guy Wins. (Ok, it's the Big Bad Duumvirate from the previous game, but still.) Oh, and it's the first Mortal Kombat game to feature online play, at least in the Xbox and PlayStation 2 versions. The GameCube version lacked this functionality, but was given two extra characters in the form of Goro and Shao Kahn.

There's also a PlayStation Portable version called Mortal Kombat: Unchained, which included all of the playable characters from the main console versions (including Goro and Shao Kahn) in addition to adding a new Endurance mode and porting over four extra characters from Deadly Alliance.