Spoilers for 1 and 2 will be unmarked

Here we're going to list the tropes that only/mostly apply to the game. For the other tropes, check their sheets.
The Flash 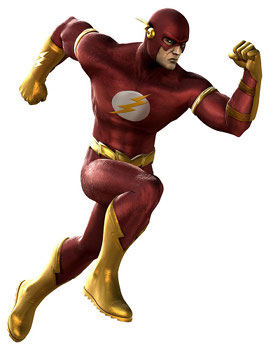 "Listen, I don't know what happened. I just... felt this rage... It overwhelmed me, I couldn't stop myself."
— To Batman in Chapter 2 of the DC side
Voiced by: Taliesin Jaffe
After a freak laboratory accident, police chemist Barry Allen was given the powers of superspeed and took on the crimson costume of the Flash. Able to travel at nearly the speed of light, The Flash can also vibrate through most obstacles and has been known to phase into entirely different realities. 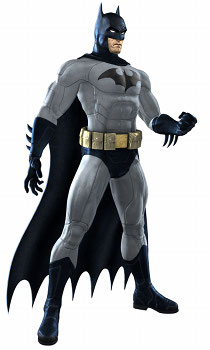 "Your world is invading mine, affecting everything and everyone in it. Don't think you can take me so easily."
— To Sub-Zero in the fourth chapter of the MK side.
Voiced by: David Gazzana
When his parents were gunned down in front of him, young Bruce Wayne resolved to rid Gotham City of the criminal element that took their lives. He trained extensively to achieve mental and physical perfection, in addition to mastering martial arts, detective techniques, and criminal psychology. Dressing as a bat to prey on criminals' fears and operating out of his secret Batcave below Wayne Manor, Batman fights crime with the aid of specialized gadgets and vehicles. 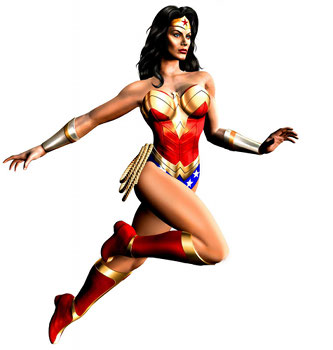 Voiced by: Tara Platt
Daughter of Queen Hippolyta of the Amazons, Princess Diana sprung from the mists of Greek mythology. She left the female-only island of Themyscira to travel to "Man's World" as an emissary of peace. Gifted with super-strength and invulnerability, her main tool in crime-fighting is her golden Lasso of Truth. Unbreakable, it forces all captured by it to tell the truth. 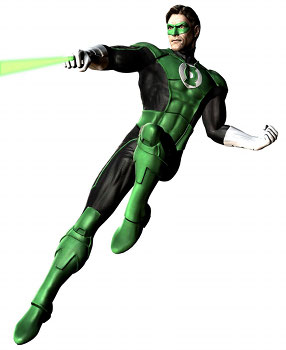 Voiced by: Josh Phillips
Fighter pilot Hal Jordan was testing an experimental aircraft when he found himself transported into the desert, to the side of a dying alien who gifted him with a glowing ring, which is charged regularly by a green lantern. By taking the ring, Jordan found himself drafted into the Green Lantern Corps, an interstellar police force that assigned him to protect Earth. Jordan can use his ring to conjure up anything he can imagine! 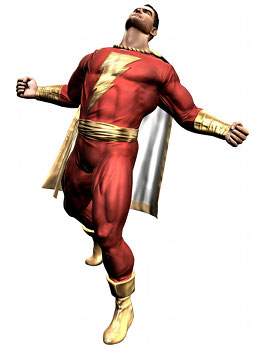 Voiced by: Kevin Delaney
Young Billy Batson was an orphan who wandered into a deep cavern. There he encountered the ancient wizard Shazam, who granted Billy the ability to transform into the hero Captain Marvel. Whenever Billy speaks the name "SHAZAM!", a mystical lightning bolt recreates him as a hero with super-strength, flight, speed, and other powers of mythological heroes. In return, he must always fight evil in its form as the Seven Deadly Enemies of Man. 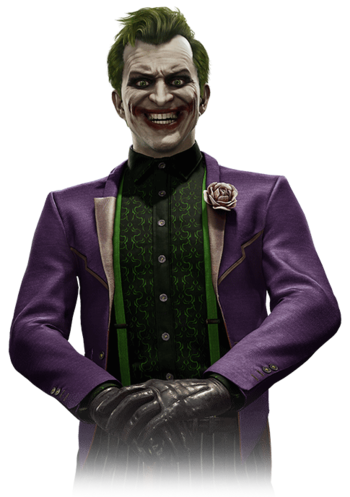 "You haven't seen crazy!"
Click here to see his vs. DC Universe design 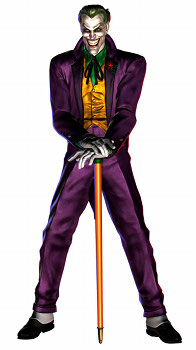 "Come on! We'll kill things, BLOW STUFF UP! Oh, it'll be fun!"
— To Deathstroke in the fifth chapter of the DC side. 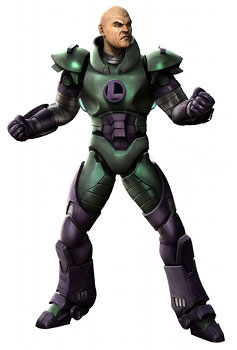 "I never take sides. I choose the lesser of two evils."
— To Catwoman in the fourth chapter of the DC side.
Voiced by: Joe Thomas
One of the richest and smartest men in the world, Lex Luthor is motivated by bottomless ambition, an egotistical disregard for morality, and an intense hatred of Superman. Using the resources of his financial empire as head of LexCorp, Luthor has developed a high-tech suit to duplicate some of Superman's abilities. Luthor is obsessed with removing the man he sees as the main obstacle to his rise to absolute power. 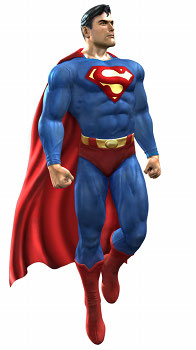 Voiced by: Christopher Corey Smith
As the planet Krypton braced for destruction, the infant Kal-El was placed in a rocket ship by his parents and sent into space. Arriving on Earth as the Last Son of Krypton, he was found and raised by Jonathan and Martha Kent on their Kansas farm. Clark Kent manifests the amazing powers of super-strength, flight, and invulnerability under Earth's yellow sun. Instilled with the values of right and wrong, he has taken on the identity of Superman to defend his adopted planet. 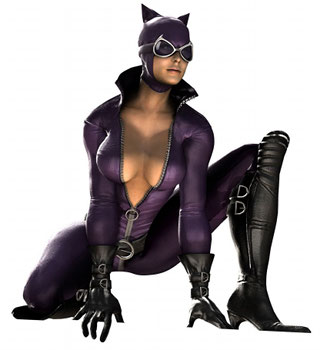 "No one cages this kitty!"
— To Sonya in the second chapter of the MK side.
Voiced by: PJ Mattson
Selina Kyle operates as a costumed cat burglar in Gotham City, and has a love-hate relationship with Batman. She is able to commit nearly impossible crimes thanks to her athletic prowess, skills with a whip, and seductive wiles. 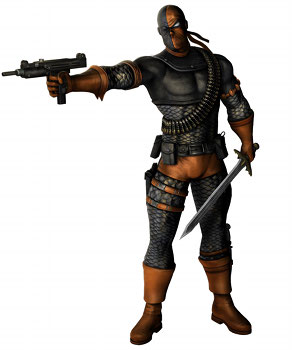 Voiced by: Patrick Seitz
Slade Wilson was given enhanced abilities as part of a military experiment, and has such confidence in his skills as a mercenary and assassin that his chosen costume highlights the fact that he only has one eye. Adept at both sword and gunplay, his superhuman physical abilities are matched by his tactical genius and his facility for manipulating both allies and enemies alike. 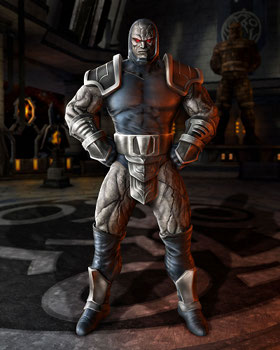 Voiced by: Perry Brown
A ruthless despot, Darkseid rules over the perpetually burning planet known as Apokolips. Obsessed with discovering the "Anti-Life Equation", he plans to use it to complete his quest for absolute power, and rule over all life in the universe. Nearly invulnerable, his powers include the ability to project Omega Beams from his eyes-dark rays with the power to alter, transport, and incinerate everything that he may come into contact with. 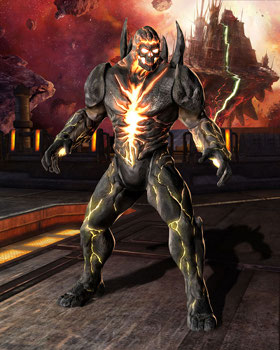 "Through Mortal Kombat, I will conquer all!"
— In the "Beginnings" comicbook
Voiced by: Perry Brown and Patrick Seitz
The Big Bad of Mortal Kombat vs. DC Universe. He's the fusion of Shao Kahn and Darkseid, who were thrown to an interdimensional portal and a boomtube at the same time and place in space.