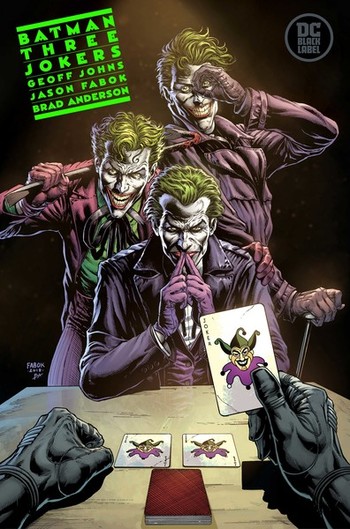 "It said there were three..."note Top to bottom: the Modern Age-esque Comedian, the Silver Age-esque Clown, and the Golden Age-esque Criminal.
Advertisement:

Batman: Three Jokers is a DC Black Label three-issue mini-series featuring Batman and The Joker, The Joker and The Joker.

During the 2016 story arc Darkseid War prior to the start of DC Rebirth, Batman, riding on the Mobius Chair, sought to learn the identity of the Joker. To his horror, Batman learned something more — there were three active Jokers. Now, together with Batgirl and Red Hood, Batman will seek out the answers to this strange riddle and find out how they all come together.