Residents of Gotham City in the Arkham videogame series. 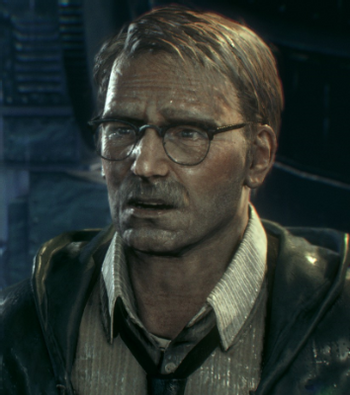 "Tonight, Gotham's relying on one man to save us all."
Gordon in Arkham Asylum and Arkham City 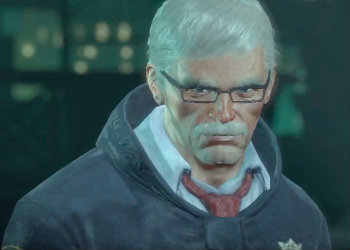 James Gordon is the head of the Gotham City Police Department and a key ally of Batman. After Arkham City was created, he began protesting Mayor Quincy Sharp's extreme policies, eventually refusing to turn over criminals to be thrown into the prison district. 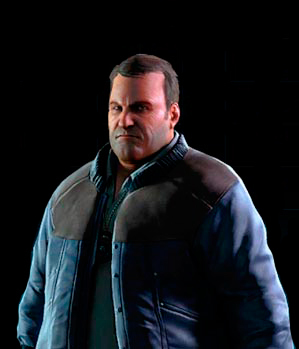 One of the police officers with the GCPD, Harvey Bullock serves as Gordon's foil in Arkham Origins. 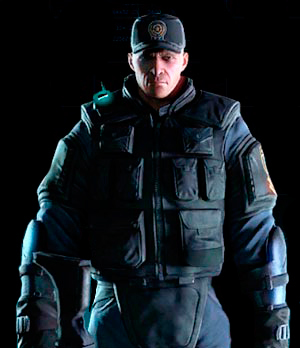 A Dirty Cop who worked as The Dragon to Commissioner Loeb, Branden serves as an antagonistic leader within the police in Origins. 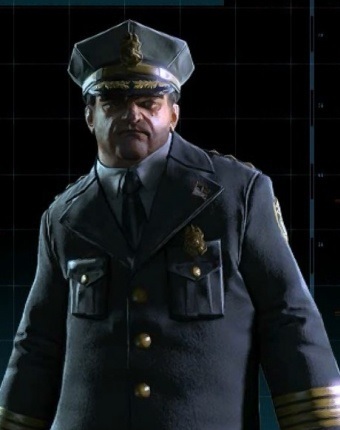 Commissioner Gillian B. Loeb was the corrupt commissioner of Gotham City's Police Department. He was murdered on Christmas Eve in the second year of Batman's career during a raid at Blackgate Penitentiary. 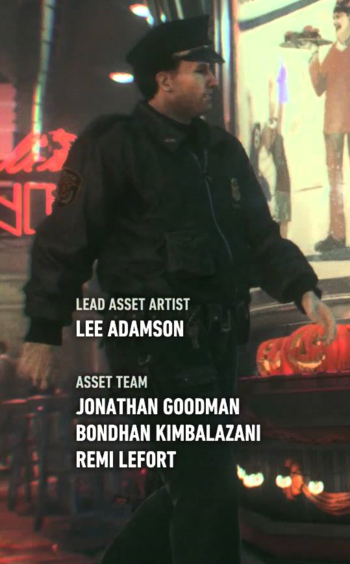 Officer Owens is an ordinary beat cop in Gotham City. On Halloween night, he stops at Pauli's Diner for dinner, only to fall victim to Scarecrow's fear gas. Notably, he serves as a playable character in the intro sequence for Arkham Knight. 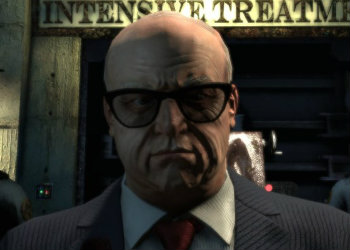 "My administration has taken steps to guarantee the personal safety of each and every member of Gotham, from the rich to the poor by separating the disgusting criminal element that eats away at our fine city like a cancer."
Voiced By: Tom Kane

Quincy Sharp is the politically ambitious head of Arkham Asylum during the events of the first game. After taking credit for stopping The Joker's takeover of Arkham, Sharp was elected mayor and created Arkham City, seeking to rid Gotham of its criminals forever. 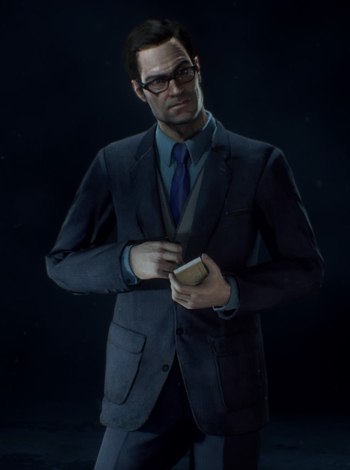 Jack Ryder is a prominent Gotham news reporter / radio host, as well as The Creeper, an insane vigilante. During the events of Arkham City, Ryder becomes trapped in the city after Hugo Strange discovers he is investigating him and has him arrested alongside Bruce Wayne. 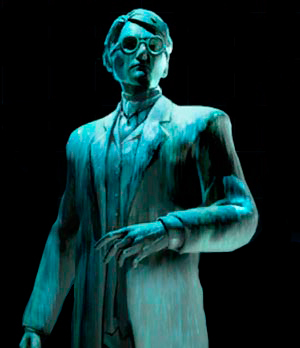 An architect that, along with Judge Solomon Wayne, helped build many of Gotham's historic buildings, including Arkham Asylum. Died before turning 40 while working with Henry Cobblepot, whom Cyrus believed was trying to make up for his hotel closing down, becoming Gotham's oldest cold-case. However, Batman finds some interesting plaques at these buildings during the events of Origins... 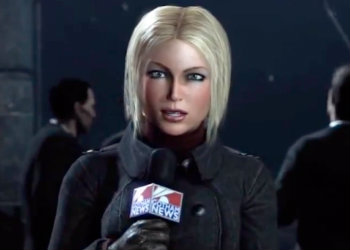 "Thanks for the help back there. Are you sure you got no comment?"
Voiced By: Grey DeLisle (Arkham City, Arkham Origins, Arkham Knight), Jules de Jongh (Arkham VR)

Vicki Vale is a reporter who hosts the Vicki Vale Show on Gotham FM, and co-hosts the Gotham Nightliner. She opposes Mayor Sharp's plan for Arkham City. 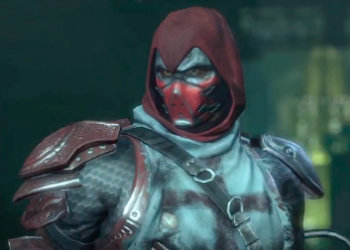 "I bring a message: dark days are coming, Batman."
Voiced By: Khary Payton

A Mysterious Watcher who follows Batman around Arkham City and warns him that dark times are coming. 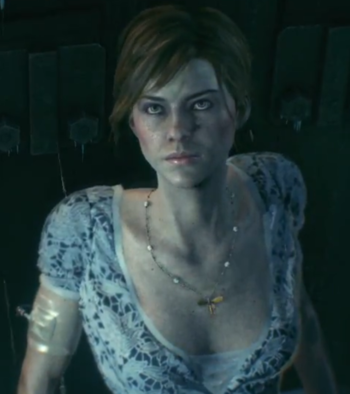 Nora as she was in Arkham Knight.
Voiced By: Cissy Jones

Nora Fries is the wife of Victor Fries, aka Mr. Freeze. She fell ill and had to be put in cryogenic stasis, prompting him to turn to crime to find the funds to cure her. During the Arkham City incident, Hugo Strange takes possession of her capsule and eventually turns her over to Joker. 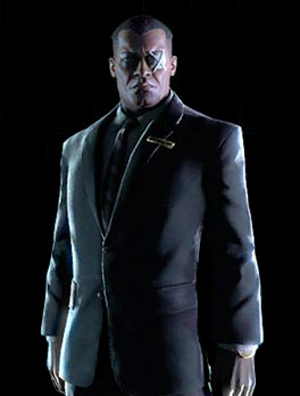 Martin Joseph is the warden of Blackgate Prison. Despite his lack of ties to any criminal elements, most of his guards are on the payroll of Penguin and Black Mask, and because of a massive rise in prisoners, his prison has fallen into disrepair, leaving him to try and hold it all together. 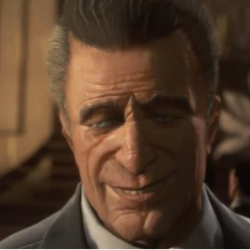 Ferris Boyle is the CEO of Gothcorp, a hugely successful business that is responsible for, among other things, the municipal security system for Gotham seen in Arkham Origins... and a line of very illegal, very dangerous freeze weapons. Although he had promised to find a cure for the illness his chief cryotechnician Victor Fries's wife was suffering from, it soon became clear he had little interest in her well-being, and Victor continued the work in secret using company resources. Incensed at the revelation, Boyle had Nora confiscated and personally assaulted Fries, leading to a catastrophic lab accident. Ferris managed to escape unscathed, leaving the rest for dead, and thought the matter settled at last - until Mr. Freeze came calling at Bruce Wayne's private awards reception...

Carmine Falcone is the most powerful crime boss in Gotham. While he hasn't been seen until Batman Arkham Underworld, his presence has been felt, as he's the one who turned Harvey Dent into Two-Face and helped Scarecrow in his plans. 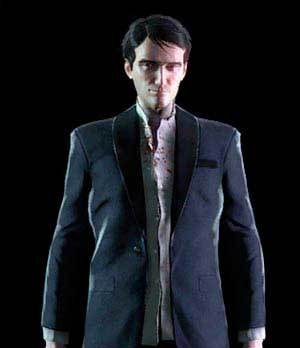 The cowardly son of Carmine "The Roman" Falcone, Alberto is the Black Sheep of the Falcones. He has a history of mental issues and had been seeing Dr. Hugo Strange about his disassociate identity disorder. He is also the Holliday Killer in secret. 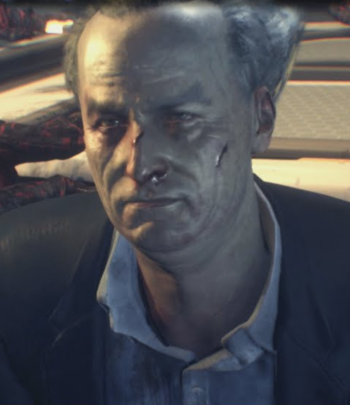 Simon Stagg, one of the wealthiest men in the world, made his fortune as an innovating force in the fields of biochemistry and sustainable energy technology. When his Nimbus-cell zeppelins are suddenly hijacked by the Arkham Knight's militia, and he himself taken hostage, Batman must find both him and Barbara Gordon before time runs out.

Alex Sartorius is the former business partner of Simon Stagg, a scientist who didn’t want the limelight and so allowed Stagg to take all the credit and fame for his research. His character is expanded on in Stagg’s audio files and a Gotham City Story. 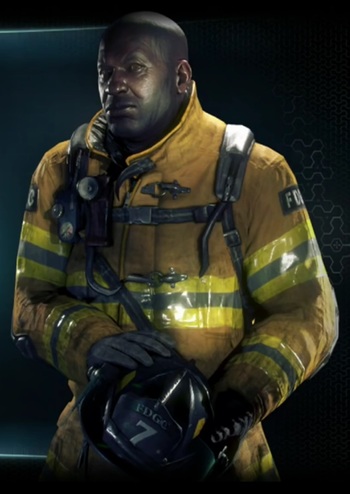 Chief Raymond Underhill is the Fire Chief of Station 17. He and his men were ambushed and taken hostage throughout Gotham during the Halloween Scarecrow attacked Gotham with the Arkham Knight's forces.

Judge Solomon Wayne
Solomon Wayne was an ancestor of Bruce Wayne's who, with the help of architect Cyrus Pinkney, built Gotham City's larger buildings. He built a hotel that rivaled Henry Cobblepot's, causing him financial trouble.
Henry Cobblepot
Henry Cobblepot is an ancestor of Oswald Cobblepot's who also built some of Gotham City's most important buildings (albeit to benefit himself). It is strongly hinted that he was behind Cyrus Pinkney's mysterious death and disappearance. 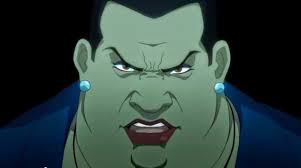 "Assemble Task Force X. We have another Suicide Mission."
Voiced By: C.C.H. Pounder 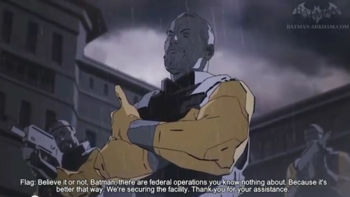 A corrupt businessman who's at odds with Bruce Wayne. 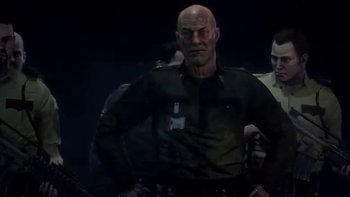 The corrupt warden of Iron Heights Penitentiary. He appears in Arkham Knight, in the Season of Infamy DLC mission "Beneath the Surface."