The War on Straw 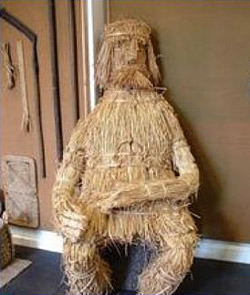 If you can't fight your opponent, try this guy instead.
Advertisement:

You've set out making your latest work with the intention to speak your piece on some contested issue, but you've found it's harder than you expected. You have to write both sides of the issue, after all, and that means fairly representing the other side of the argument. What if you're not entirely clear on what the other side is?

Simple: declare war on straw! You're the writer, aren't you? You control what the "other side" has to say. All you need to do is present the opposing position as a laughable shadow of its former self and you can easily knock it over. You'll always be the winner! Everybody loves a winner. Bonus points if the opposing side is violently murdered afterwards (with the killer never being punished, naturally, because why would you ever punish someone who's right?).

Some of the tropes here are not strawmen every time they appear; for instance, a Corrupt Church, Animal Wrongs Group, or Amoral Attorney can sometimes be used as a villain a la Acceptable Targets without any (deliberate) intention of making a larger political statement. Sometimes people use those things with the justification that they do exist in reality to a limited extent — but they are still strawmen when used, implicitly or explicitly, to try to make a larger argument against anyone who shares their beliefs (especially if they happen to be particularly extreme and/or alienating to even other people who do share them but are decidedly more moderate about the topic in question).

Sometimes the existence of non-corrupt/wrong/amoral versions is acknowledged in the setting to indicate that there's no hard feelings; on the other hand, sometimes those good versions are really a Fox News Liberal used to try to make an actual strawman less obvious.

It is also important to note that caricature, itself, can be a perfectly valid way to make an argument; Voltaire, Swift, and many other writers have used it effectively and incisively against their opponents. The distinction is that valid caricatures use exaggeration and hyperbole as rhetorical devices to present nonetheless legitimate arguments, exposing the victim's failings and flaws without misrepresenting them. But the line between the two can be extremely thin, especially in unskilled hands or when the author does not truly understand what they are trying to caricature; many authors have produced strawmen that were painfully obvious to others while believing themselves to be penning biting Swiftian satire.

For more detail about the fallacy upon which this series of tropes is named, see the "Strawman Fallacy" section of Logical Fallacies.

The flip side (where a position is so off-the-wall that it's impossible to distinguish between a genuine statement and an exaggeration/parody) is Poe's Law. The actual inverse is sometimes referred to as steelmanning, where a debater attacks the strongest possible interpretation of their opponent's argument, even if it is not the argument they necessarily made. This is often used against evasive "guerrilla debaters" who attempt to avoid actually presenting their own arguments, in the hope of constantly taking shots at their opponent without having to defend their own position.

If you are a content creator, a way to avoid attacking a straw man is to study what the other side says, and why, well enough to pass an ideological Turing test

as a member of the other side.

When you fought the straw and the straw won (in the opinion of your readers/viewers), it's Strawman Has a Point.

The War On Straw has many fronts; among them are:

There's a straaaaawmaaaaan waiting on the net! He'd like to come debate us, but he knows his points are shit!