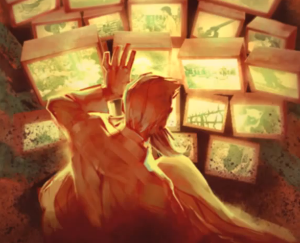 He called it "Television". Why walk, when you can let the world come to you...
"You provide the pictures, I'll provide the war."
— William Randolph Hearst, allegedly using yellow journalism to kickstart the Spanish-American War

In the real world, newspapers, network television stations and other bastions of old media have complicated relationships with the Internet. They have sometimes been hostile to it, while also desperately embracing it in pursuit of new revenue streams in these difficult days. The New York Times's website is one of the most popular in the world, and quite a lot of commentators have Twitter feeds.

But this relationship is sometimes too complicated for a full and accurate portrayal in fiction. And thus we have the polar opposite of New Media Are Evil. Many works portray old media institutions (newspapers, radio, TV networks) as ignorant, malicious or both. The classic example of this trope is the stodgy old white guy railing against bloggers, webcomics, and anyone not under the influence of the brainwashing satellites owned by Louis Cypher, S. Atan, and Rupert Murdoch. Expect "get off my lawn"-type comments to come up rather frequently.

The reality? Most reporters, editors or other practitioners of old media are generally decent folk who do their jobs. They're no different from your typical insurance adjuster or other office mook. Because their jobs involve extensive public communication, mistakes tend to get amplified. If a reporter just broke up with a significant other and comes in bitter and angry and lets it affect his or her work, or simply makes an understandable mistake in spelling, an eagle-eyed reader will notice it. And as those mistakes are in the public eye, they can result in some innocent citizen getting burned on the front page. Media personnel usually receive extensive ethics training and take mistakes very hard. None of that makes the burned individual feel any better about getting humiliated in their local paper.

There is also a bit of an idea that older media institutions, due to being run by large centralized organizations, are prone to being taken over by corrupt and/or tyrannical governments and used as propaganda mills, while the internet still has a bit of a "rebel" feel to many people.

One of the ways authors allow certain members of old media institutions to Pet the Dog is to show them embracing the new media, especially in contrast to their less tolerant bosses and co-workers. Interestingly, this trope is actually Older Than They Think; people have been making jokes about how lame books are for a long time.

Meta note: a lot of Tropers have a lot of problems with old media figures, and often for good reason. That said, there are numerous pages on this Wiki devoted to chronicling the foibles of newspapers, TV, radio, etc. See: Cowboy BeBop at His Computer, New Media Are Evil, The New Rock & Roll, among others. So No Real Life Examples, Please!.