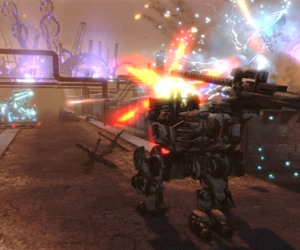 You got Tower Defense in my Mecha Game! Now they taste better!
"Turn No Man's Land into Real Man's Land!"
Advertisement:

Iron Brigade (formerly known as Trenched) is Double Fine's fourth downloadable game as part of their Amnesia Fortnights venture, changing the studio from making one large title every few years to making multiple small games in one year.

The year is 1926, and the world is being invaded by monsters made completely out of primitive television sets known as Monovisions or Tubes, which no conventional military has been able to defeat. The only force capable of facing them is the Mobile Trench Brigade, an elite squad of soldiers trained to use Mobile Trenches, which are quite literally World War I trenches slapped on a pair of robot legs, with a human soldier operating the whole thing from inside the trench.

It all began during World War I, when American soldier Frank Woodruff survives getting his legs crushed by a tank and is reassigned to a radio listening post in the Pacific to listen in on enemy radio transmissions. While there, he befriends Vladimir Farnsworth, another crippled soldier. While working, they listen in on an unknown signal, later dubbed the "Broadcast", that killed all who heard it except for Woodruff and Vlad. Instead, they gained supernatural genius.

Woodruff used his newly found genius to invent mobile robotic legs to help his fellow disabled veterans. Vlad used his gifts to invent the "Monovision", in an attempt to bring the world to the comfort of your home. Unfortunately, the end result was the horrors of the world coming straight to him (along with really crappy programming), which drove him to insanity. Vlad then created a race of mechanical monsters made entirely of television sets, which shared the name of Vlad's invention. Colonel Woodruff equips the mobile robotic legs he developed with weapons, and forms the Mobile Trench Brigade to fight his former friend's creations.

The game is a Spiritual Successor to Brütal Legend, with a slant towards Monday Night Combat. Rather than commanding free roaming units like a Real-Time Strategy game, the game combines action with Tower Defense. Each player has the ability to customize their Mobile Trench with over 200 different parts. The Trenches are divided into three types, Standard Trenches balancing weapons and turrets, Engineering Trenches with lighter weapons but more turret emplacements, or Assault Trenches with limited turrets but the greatest weapons capacity.

The game was originally published by Microsoft and released in 2011 for Xbox 360, then in 2012 for Microsoft Windows, bundled with Games for Windows Live in the latter case. On May 28, 2015, Double Fine got the IP rights the PC version of the game was switched from Games for Windows Live to Steamworks for matchmaking, squashing several Game Breaking Bugs in the process.