War Has Never Been So Much Fun 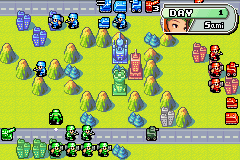 Frankly, I had enjoyed the war… and why do people want peace if the war is so much fun?
— Adrian Carton de Wiart
Advertisement:

Many strategy wargames have a bright and colorful look and feel. Units are painted in bright, cheery colors, the soldiers' faces look vaguely chibified, the tanks look like ice cream scoops on treads, and the warzones wouldn't look out of place in a Sugar Bowl, though Ludicrous Gibs isn't out of the question. "Cute" wargames often have little plot, focusing strictly on gameplay and visually appealing designs. They also tend to be on the Idealism side of the Sliding Scale of Idealism Versus Cynicism and on the silly end of the Sliding Scale of Silliness vs. Seriousness.

For the Shoot 'em Up version, see Cute 'em Up. See also the Sugar Apocalypse for a more graphic way in which war can come to the Sugar Bowl. See also A Million Is a Statistic, which is related, but the issue there is more one of scale than of style. Not to be confused with War Is Glorious.

Contrast Real Is Brown and War Is Hell.

Examples from other media