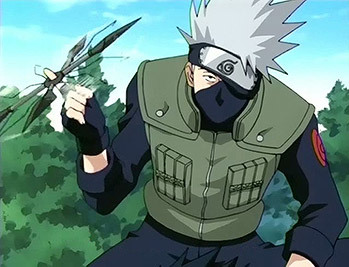 It's well known that when it comes to fictional fight scenes, what looks exciting and cool is far more important than what would be effective in real life. That's where Weapon Twirling comes in because spinning is spectacular. It's visually interesting and looks like it may be difficult to pull off, and is thus cool. It's also used when a character would otherwise be standing idly since someone just standing around with a weapon isn't as interesting as that person doing fancy tricks with that weapon.

In certain cases, some weapons have large rings or straps at the end of their handles, allowing the ability to spin or twirl their weapon much easier. The former is more common in short-bladed weapons such as knives or daggers (kunai and karambits are good examples) and for the latter it's more commonly seen with blunt weaponry (namely batons.)* In fact it's common to see straps on Lawman Batons used by Old Fashioned Coppers and then used as they twirl them around while patrolling, whistling a tune may or may not be required.

In some instances, spinning weapons are used to block projectiles, attack enemies, or create wind attacks.

If the weapon twirling is being used show off before an attack, probably with the intent to intimidate, it's also Intimidation Demonstration. Can also overlap with Unorthodox Sheathing.