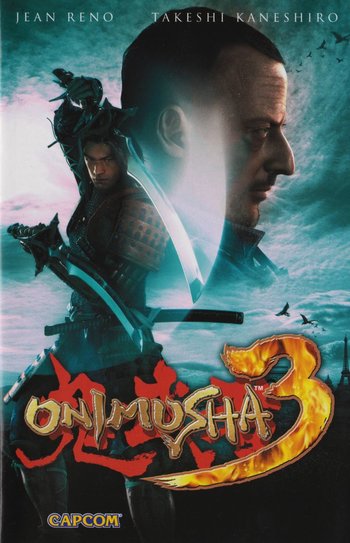 A battle across time is about to begin
Advertisement:

Onimusha 3 (known outside Japan as "Demon Siege") is the third entry of the Onimusha series, debuting in April 2004.

Japan, 1582: Samanosuke Akechi, after long years of hiding in the wilderness, has finally returned, having mastered the true powers of Onimusha and showing this by infiltrating a Genma convoy and wiping it out, killing the Genma general Gargant. He then joins his uncle's side at Honnoji to strike down the evil Nobunaga and end his ambitions once and for all. However, his duel with the powerful Genma lord is interrupted by a mysterious black vortex...

Paris, 2004, a normal morning is suddenly interrupted by the arrival of a giant horde of monstrous creatures, which proceed to slaughter everyone in sight. Police officer Jacques Blanc jumps in the fray to fight the monsters, when all of sudden, a red-armored samurai appears and slays the demons, and Jacques falls in another warping black hole, which sends him back to medieval Japan. It turns out Guildenstern, the Genma scientist, made use of a dangerous Oni machine, the Time Folder, to open portals in time so that the Genma could simultaneously invade the past and the future in one go, and the black vortexes sent both heroes in different ages. In 2004, Samanosuke, deprived of his powers, must regain his strength and stop the modern day invasion, finding a way back, while Jacques in the past is entrusted with another Oni Gauntlet and has to help Past!Samanosuke against Nobunaga. Will the two heroes be able to thwart the Genma's ambitions and return to their respective ages?

Onimusha 3 was considered a vast improvement over the previous games: this time, it features fully 3D scenarios which faithfully recreate famous historical backgrounds (mostly in the present sections), a whole new sets of powers, abilities and puzzles, now with better controls which make the game more action-oriented. There's also the fact that is the first game to introduce a "Western" Onimusha, being a Ink-Suit Actor of Jean Reno note (though, sadly, due to his busy schedule at the time he couldn't do all the dub besides his few French lines).

It was eventually followed by the latest (and so far last) game, Onimusha: Dawn of Dreams.