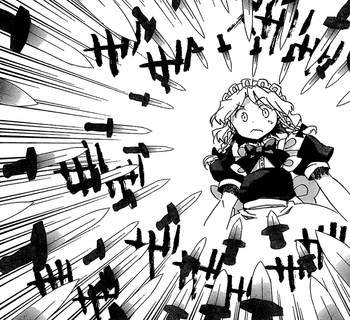 "Knife to meet you, Sakuya."
Glory: What's this, bag of tricks?
Willow: Bag of knives.
[a dozen daggers lift out of the bag and fly at Glory]
— Buffy the Vampire Slayer, "Tough Love"
Advertisement:

Okay, so flinging pointy death from above is all well and good, but what if you aren't adept at archery? Never fear! Just grab your favorite knife, shuriken, deck of cards, or anything else that's small and razor edged, and start tossing.

Meaning "little arrow" or "dart" in French, a flechette is any pointy projectile — smaller than your traditional arrow or crossbow bolt — that can be thrown or fired with the intention of cutting, impaling and/or poisoning your opponent, and most societies have their own brand of flechette projectile that can be used. Thrown or fired, just like a Rain of Arrows, a veritable hail of these weapons are quite effective in cutting down large groups, and it's no surprise that most warriors specializing in thrown weaponry depicted in fictional media are able to create that tempest with a few simple tosses. If the flechettes are magical or infused with Ki, expect them to function like homing Reverse Shrapnel. Since these projectiles are very sharp, they have a lower than average tendency to actually hit anything, though they may well stick your clothing to the wall.

Sometimes shaking out some loose feathers works like this too, and the same goes for spines, stingers, and other long and sharp-pointed body parts.

A subtrope of Spam Attack. Compare Storm of Blades and Rain of Arrows. On a smaller scale, it is very similar to a Macross Missile Massacre.

The Daoist uses a storm of magic needles as a projectile attack.

The Daoist uses a storm of magic needles as a projectile attack.