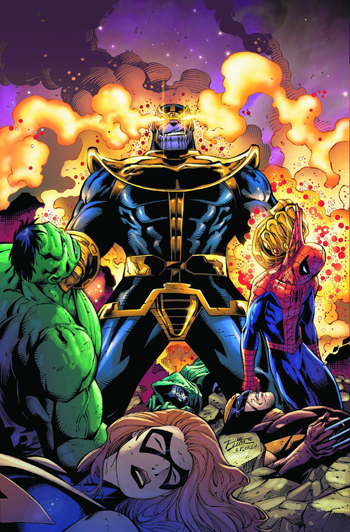 "I know what it's like to lose. To feel so desperately that you're right, yet to fail nonetheless. It's frightening... turns the legs to jelly. But I ask you, to what end? Dread it, run from it... destiny arrives all the same. And now, it's here. Or should I say: I am."
"First Prime, then Ultra Magnus, and now... you. It's a pity you Autobots die so easily, or I might have a sense of satisfaction now."
— Galvatron (to Hot Rod), The Transformers: The Movie
Advertisement:

In many works of fiction The Hero isn’t the only hero doing good out there. These other heroes might be recurring minor characters or part of The Order, and may have little impact on the central narrative, but they are heroes nonetheless, often the greatest warriors in the land, conquering evil without fear.

That is, until the Hero Killer comes along.

Exceptionally powerful, incredibly skilled, the Hero Killer has one purpose, which he pursues ruthlessly: kill the heroes. He will hunt down the greatest knights and he will slaughter them, one after the other. What makes him so powerful? Maybe he knows how to exploit heroes' weaknesses. Maybe he was engineered for that very purpose. Maybe he made a Deal with the Devil. Maybe he is fueled by exceptional determination. Regardless, he has earned a reputation for curb-stomping heroes regularly and reliably, often without exception. Expect a No-Holds-Barred Beatdown and/or Curb-Stomp Battle should his prey be unprepared.

Even the noblest, most powerful heroes will quake in fear at the sound of his name. This reputation is indeed key, as ironically they may never be seen actually killing anyone important first hand because of the lack of a Sacrificial Lion or C-List Fodder to put in their way. Similarly, a hero can die without their killer being a Hero Killer, although their reputation might explode into being someone they are not.

Closely related to The Dreaded: Their legend may inspire the heroes to train and improve their skills throughout the story, fleeing or avoiding the Hero Killer until such point as the hero is finally ready to face him; even then, they're probably going to need everything they have to stand a chance. If the hero gives the Hero Killer a run for his money, it may be a Moment of Awesome; if he wins, he's defeated the undefeatable. With that in mind, remember character deaths are required for a character to qualify, be they in backstory or present plot.

This character usually invokes The Worf Effect and is often a grim reminder that Anyone Can Die if the work is dark. If the work was fairly light-hearted before this guy appeared, then he's a Knight of Cerebus. He is very often the "Goliath" in a David vs. Goliath scenario. If he's very dogged in his pursuit of heroes he overlaps with Implacable Man. In video games, contrast That One Boss, which is when it is the player and not necessarily the characters that has difficulty beating an enemy. Contrast Villain Killer, a hero who specializes in killing villains or has a reputation for doing so.

Since this is a Death Trope, SPOILERS AHEAD.