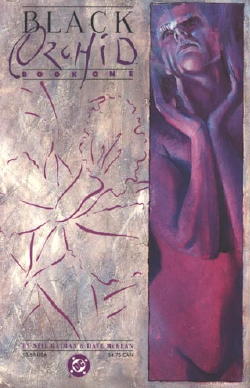 Black Orchid is a DC Comics superheroine whose big moment of fame came in a miniseries written by Neil Gaiman, with art by Dave McKean. (There's a well-known anecdote to the effect that when Gaiman asked his DC editor if he could do a Black Orchid story, he then had to explain to her who Black Orchid was.) In particular, there's one very famous expectation-subverting scene; at the time this page was created, that scene alone was responsible for fully half of the Black Orchid-related trope examples on this wiki.

To begin at the beginning: Black Orchid was created by writer Sheldon Mayer and artist Tony DeZuniga, and debuted in Adventure Comics #428 (July, 1973), during the early days of the Bronze Age. After three try-out issues of Adventure Comics, she became the regular back-up feature in The Phantom Stranger for the next few years.

Black Orchid is a master of disguise, and many of her adventures involve her going undercover in the criminal organisation she is investigating. She can also do more standard superheroics; she has a purple superhero outfit and can fly, has super strength, and is Immune to Bullets. The stories never showed her when she wasn't in some disguise, nor revealed her real name or the origin of her powers (although one story arc gave an apparent reveal, which then turned out to be part of a Costume Copycat plot).

There apparently wasn't enough demand for Black Orchid to get her own series, and when the 1970s version of The Phantom Stranger ended its run, she slipped into obscurity for a decade.

She began reappearing in the late 1980s, as some of the children who had read her adventures became comic book writers themselves. She appeared in an issue of Blue Devil where various mystic themed characters gave conflicting origin stories for her that parodied some of the more famous Marvel origin stories. She made a string of appearances with John Ostrander's Suicide Squad, putting her mastery of disguise to good use. And then in 1988 came Neil Gaiman's Black Orchid miniseries.

The miniseries, one of the pioneering titles that influenced the later Vertigo Comics imprint, starts in the familiar way, with Black Orchid impersonating a secretary to get the goods on another criminal organization. Then it turns out the secretary's boss knows who she really is — and instead of ranting at her, sticking her in a death trap, or locking her in a storeroom until the Big Bad arrives, he shoots her in the head. Then, having empirically verified that she really is Immune to Bullets, he burns down the building with her still inside.

It turns out that the real protagonist of the mini is Black Orchid's sister, who is left to deal with the fallout of her death and sort out the messy history of their family, in the process finally revealing who she was and whence her powers. (It's complicated, and involves cameos by just about every plant-themed hero or villain on DC's roster, from Poison Ivy to the Swamp Thing.) At the end of the mini, the sister takes up the mantle and becomes the new Black Orchid.

There was a 22-issue Black Orchid ongoing series featuring the new Black Orchid, not written by Neil Gaiman. The Vertigo Black Orchid made occasional cameo appearances from time to time in titles such as Birds of Prey.

A Black Orchid resembling the original, classic version is now a member of the Justice League Dark in DC's rebooted New 52 continuity. The fate of the Gaiman version of the character has yet to be confirmed.

She appears in Justice League Dark, voiced by Colleen O'Shaughnessey.

Not to be confused with the Black Orchid in Killer Instinct.