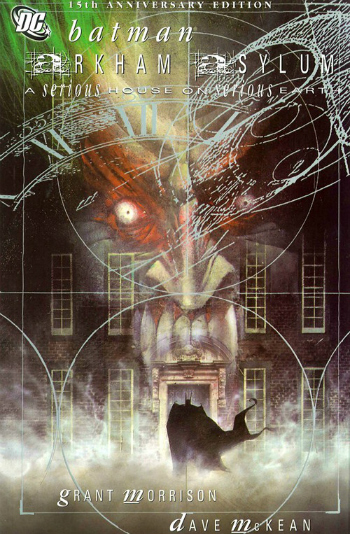 The most serious house on the most serious street in America, where nothing remotely silly will ever happen.
Sometimes... sometimes I think the Asylum is a head. We're inside a huge head that dreams us all into being. Perhaps it's your head, Batman. Arkham is a looking glass... and we are you.
— The Mad Hatter
Advertisement:

Amadeus Arkham ended up living the remainder of his life in the asylum he founded, after losing a battle with his own private mental illness which started at childhood and was fueled by the murder of his wife and daughter. Many years later, the inmates have taken over (as opposed to just getting out like usual) and threaten to kill the staff unless Batman comes. As they plan to exact revenge, Batman runs into the depths of the asylum. What follows is a surrealist, heavily atmospheric sequence of symbols based on everything from The Bible and the occult to Jungian and Freudian psychology.

The title is taken from Philip Larkin's poem "Church Going".

While the events of the story are only considered canon by some writers, the backstory of Arkham Asylum and the Arkhams has been integrated into the mainstream DC Universe.

More recent editions come with a full script, which is a huge help in understanding what the hell is going on. The current release is the Deluxe 25th Anniversary edition

The video game Batman: Arkham Asylum also takes many cues from the graphic novel (along with Batman: The Animated Series and Arkham Asylum: Living Hell).