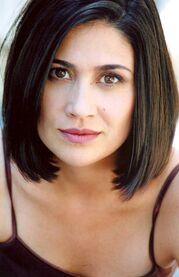 Colleen Ann O'Shaughnessey, a.k.a. Colleen Villard (born September 15, 1971 in Grand Rapids, Michigan) is an American voice actress. You may know her from the first and second seasons of Digimon as Sora Takenouchi (that's her first major voice actor role, by the way). She is also well known for playing Jazz Fenton in Danny Phantom, The Wasp in The Avengers: Earth's Mightiest Heroes!, Jody Irwin in The Life and Times of Juniper Lee, and Ino Yamanaka and Konohamaru in Naruto. Now, she is the voice of Nel Tu in Bleach. As of Sonic Boom, she has replaced Kate Higgins as the voice of Miles "Tails" Prower.

She has also worked in the video game industry where she voiced Genis Sage in Tales of Symphonia and KOS-MOS in Xenosaga II.

Her children, Connor and Maggie Villard, are also actors.