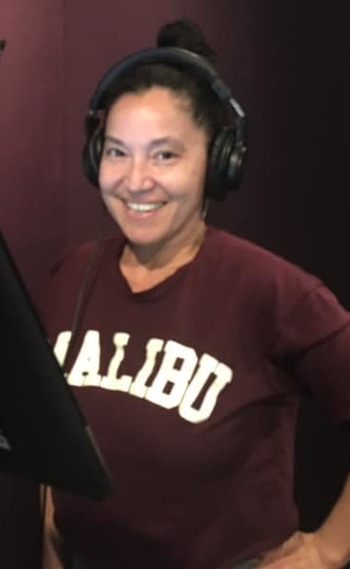 Her first major roles came as Gi of Captain Planet and the Planeteers and Keiko of Potsworth & Company. She dropped off the face of the Earth for the next decade or so before resurfacing as the titular character of My Life as a Teenage Robot, Ami Onuki on Hi Hi Puffy AmiYumi, and the two Chin twins on Class of 3000.

Outside of cartoons, she's dubbed anime as Shizuku in Hunter × Hunter and Yuzu Kurosaki in Bleach, which coincidentally features her Teenage Robot co-star Quinton Flynn. In video games, she's played against type as the sadistic villainess Alice in Tales of Symphonia: Dawn of the New World, though taking over for Tara Strong as Presea was a bit closer to her usual roles as sweet Genki Girls.

Being Japanese-American, she's the inversion of Surprisingly Good English; she speaks Japanese very fluently, as she demonstrated on Young Justice as a character who spoke solely Japanese. She and Keone Young have also taught Grey DeLisle Japanese through their collective experience on Hi Hi Puffy AmiYumi.