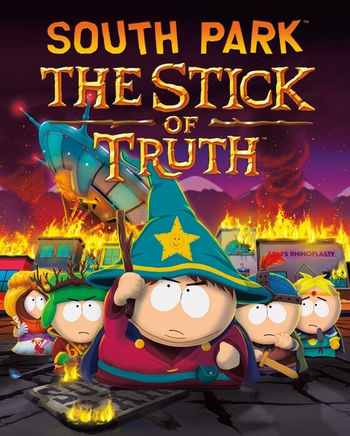 An epic quest to become... cool.
"Sweetie, we want you to have lots of fun here. Why don't you go out and make some friends?"
—The New Kid's Mother
Advertisement:

South Park: The Stick of Truth is a 2014 Western RPG based upon the show, developed by Obsidian Entertainment. Much like the show itself, Trey Parker and Matt Stone have oversight over the project, writing the script and providing voiceovers for the characters. It was released on March 4, 2014 for the Xbox 360, PlayStation 3 and PC with a port later released for Xbox One, Playstation 4, and Nintendo Switch. Another noteworthy point is how both the graphics, gameplay, even the user interface are meant to look as though they came straight out of the show.

When The New Kid arrives in town, he is immediately drafted into a city-wide live-action roleplay between the kids of South Park Elementary, which escalates into a good vs. evil battle threatening to consume the world. He shall fight alongside Cartman, Stan, Kyle, Kenny, Butters, Jimmy, and Randy as a new friend, to cement his status as either a socially-acceptable savior among peers, or be forevermore known as a loser.

Fighting is Turn-Based Combat with Action Commands, with the New Kid leveling up from experience points and buying new equipment with money collected from defeated opponents. You also get perks from getting enough friends on Facebook, and you get those from talking to people and completing side quests. While there is a main quest, most of the town of South Park is open from the get-go, allowing you to explore and complete the main quest or side quests at your leisure.

Originally intended to be published by THQ, the game was instead published by Ubisoft due to the former's bankruptcy in early 2013. A sequel, South Park: The Fractured but Whole, was released in 2017, but Obsidian did not come back for development. However, The Stick of Truth is packaged with Fractured But Whole for anyone who buys the latter before the end of January 2018, in order to get anyone who hasn't already played The Stick of Truth up to speed. A side game for mobiles called South Park: Phone Destroyer was released in 2017.