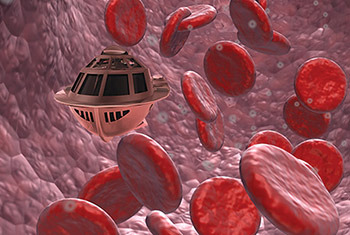 "What kind of bloody vessel is this?"
"Fantastic idea for a movie. Terrible idea for a proctologist."
— The Twelfth Doctor, Doctor Who, "Into the Dalek"
Advertisement:

A plot that involves characters being shrunk to enter someone's body. Usually animated. Travel is often via submarine and scuba variants. Lighting is rarely a problem. Often has a time limit parameter, where either the person the characters go inside has a very short amount of time left to live, or the shrinking is temporary and the characters must accomplish their mission and get out before they kill the person by returning to normal size while inside of them. There will be at least one scene of just barely squeezing through some sphincter or valve as it closes. If there's a scene inside the stomach, expect to see random inedible objects scattered around for comedic effect (even if the character isn't an Extreme Omnivore) and/or food that has been swallowed whole that would normally be too large (such as whole burgers or hot dogs). These items tend to make handy platforms for any body explorers lacking a submarine, since shrunken characters usually suffer instant death upon contact with stomach acid (either that or they are completely immune). Protagonists being menaced by Seeker White Blood Cells, Monstrous Germs and/or giant tapeworms (well, giant to them) is also common.

For some reason, visibility is almost never an issue in these adventures, even though the inside of your body would be pitch black, unless fictional humans all have an ambient light organ somewhere in their torso.

See also Incredible Shrinking Man. If there are normal-size invaders inside a giant's body, then you have been Swallowed Whole. Curiously, giant bodies tend to be filled with large open spaces for movement and even extended travel within, even if one was swallowed.

Named for the granddaddy of them all, a movie co-starring Raquel Welch, which also spawned its own Animated Adaptation. An episode with this plot will usually contain some kind of direct homage to or parody of said film — a favourite being the infamous Clothing Damage scene. Bizarrely, the titles of such episodes surprisingly often reference Journey to the Center of the Earth instead, with the person's name or a noun that describes them in place of "the Earth".

Not to be confused with the funkarific song by Lakeside. Or Coolio's 1994 hit sampling it. Sometimes, characters can go into a robot's body as well, to resolve a Glitch Episode.

Compare and contast with Journey to the Center of the Mind, Ghost in the Machine, Animate Body Parts, Anthropomorphized Anatomy, and Brain with a Manual Control. If somebody's body just happens to be the Adventure Town this week, you're probably just flying in a Womb Level.

SpongeBob and Patrick travel inside Squidward to retrieve his clarinet reed.

Alternative Title(s): Voyage Through The Body, Journey To The Center Of The Body

SpongeBob and Patrick travel inside Squidward to retrieve his clarinet reed.