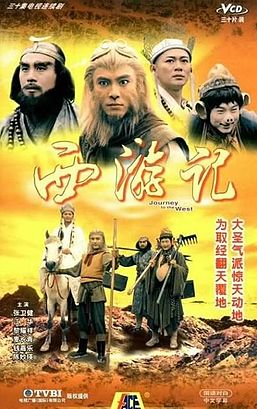 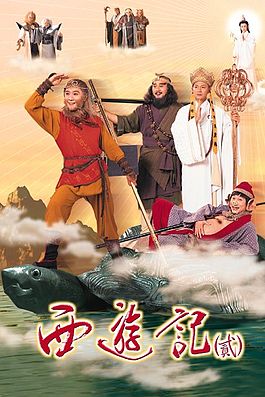 Journey to the West is a Hong Kong television series adapted from the novel of the same title. Starring Dicky Cheung as Sun Wukong, Kwong Wah as Tang Sanzang, Wayne Lai as Zhu Bajie, and Evergreen Mak as Sha Wujing. The series was produced by TVB and was first broadcast on TVB Jade in Hong Kong in November 1996. A sequel, Journey to the West II, was broadcast in 1998, but the role of Sun Wukong was played by Benny Chan instead, due to contract problems between Dicky Cheung and TVB.

This adaptation is rather loosely based on the novel and has some differences. It contains several new characters from good and bad guys alike which are not present in the novel. While some argue it's not best adaptation due to having few similarities with the novel, it has its own fanbases. Mostly because the series is Lighter and Softer (some hostile characters even go on Adaptational Heroism), more family-friendly (there are many fans who note this is their favorite tv series in their "childhood"), and contains many Rule of Funny played in most episodes. Though some of which are Black Comedy (such as treated violence as comedy and sometimes in the form of Amusing Injuries suffered by certain characters), it is still favorable.

This series is generally regarded as Dicky Cheung's breakout role.

This series is NOT to be mistaken with Monkey King: Quest for The Sutra, a remake where Dicky reprises his role as Sun Wukong.