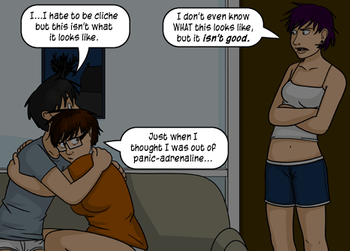 Iago: Your wife's cheating on you.
Othello: She is? (kills wife) Damn, she wasn't really.
— Book A Minute, Othello
Advertisement:

Similar to Mistaken for Gay, this is when a character is wrongly accused of cheating on his spouse or girlfriend because of a series of misinterpreted clues. Usually these clues look very suspicious (a bra left in his apartment, lipstick on his collar, a piece of Affair Hair, a romantic note) and the real story is hard to believe and/or involves secrets the accused character doesn't want to reveal. The wrongly accused may protest "Wait! I Can Explain!" or "It's Not What It Looks Like!" If the spouse or girlfriend is another major character, the conflict will be resolved; if the love interest is a Girl of the Week, she may storm off, thus ending the relationship.

Shows aimed at kids also have a version where it's the kids who wrongly suspect that one of their parents is cheating on the other. Other variants include the love interest discovering that the would-be boyfriend thief is actually a relative, a member of an Incompatible Orientation, or in rare cases, even the wrong gender.

One notable property of this trope is that it can be used on shows that, because of their genre or their scrutiny by Moral Guardians, could never use a plot that involved actual adultery. But you can get some of the same benefits from a story where a character wrongly believes that adultery is going on.

See also Mistaken for Index. Supertrope of Spy's Suspicious Spouse. Often part of an Idiot Plot; and can result in Poor Communication Kills, at least figuratively. May be resolved with The Grovel.

"A text would've been enough!"

When Darwin tries to steal a bike, he accidentally causes Julius's girlfriend to crash. Darwin's attempt at a Fake Out Make Out only make her think Julius is cheating.

"A text would've been enough!"

When Darwin tries to steal a bike, he accidentally causes Julius's girlfriend to crash. Darwin's attempt at a Fake Out Make Out only make her think Julius is cheating.