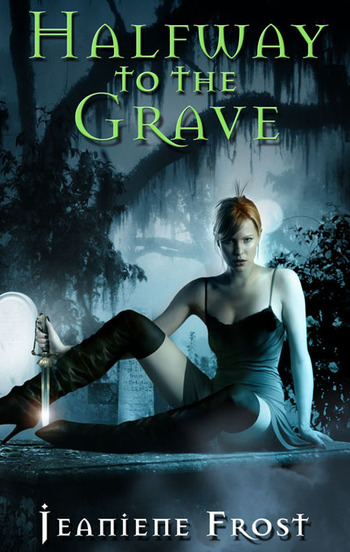 The clock struck eleven and Cat the vampire huntress was on the loose, except my battle armor was a push-up bra, curled hair, and a short dress. Yeah, it was a dirty job, but I was going to do it.
—Cat Crawfield, Halfway to the Grave
Advertisement:

An Urban Fantasy series of books written by Jeaniene Frost, following the adventures of Catherine "Cat" Crawfield, a half-vampire, and Crispin "Bones" Russell, a Master vampire and bounty hunter. These books are told from Cat's point of view. The Night Huntress World books are set in the same universe, but feature supporting characters in the main roles. The Night Prince series is a spinoff featuring a new main character, Leila Dalton, a human with control of electricity and the power of psychometry. Vlad Tepesh (do NOT call him Dracula) is her love interest. Following that is the Night Rebel spinoff, with ancient vampire Veritas as the main character and Bones's friend and sire Ian as her love interest.

Cat Crawfield is a Half Vampire who hunts her father's kind in order to avenge her mother's rape. Then she meets Bones, a vampire bounty hunter who offers to train her in exchange for her help hunting down a particularly evil group of vampire criminals. Cat agrees, on the basis that the enemy of her enemy is the lesser of two evils, but the longer she knows Bones, the more she begins to question her closely-held belief that all vampires are evil.

Later, a shadowy government agency makes Cat an offer she can't refuse—lead and train their team of vampire hunters or go to prison. Commander Crawfield and her hand-picked team succeed beyond their expectations, but she still has unresolved issues with more than one vampire in her life. The series itself is seven novels, with some spinoff series, short stories and novellas.

Recommended reading orders can be found on the author's website here

Tropes in the Grave: