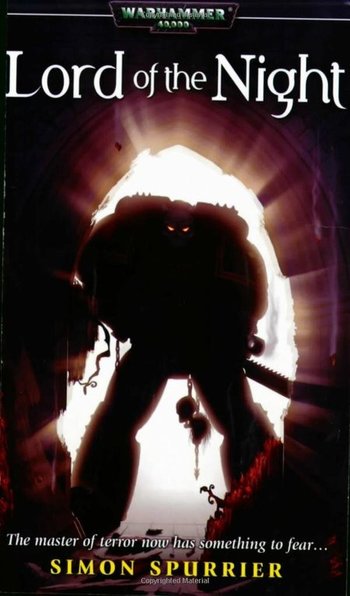 "Death is nothing compared to vindication."
— Konrad Curze
Advertisement:

The Night Lords are one of the most iconic legions of Chaos Space Marines in Warhammer 40,000. Even before the Horus Heresy broke out they were infamous for their brutal attacks (which often involved excessive amounts of force) and terror tactics. Essentially, think of an entire army of eight-foot-tall genetically enhanced supersoldiers in power armour, and now they incorporate all the darkest aspects of Batman filtered through the characteristic grim darkness of the far future. This will only come a fraction of the way to summarising what the Night Lords are, but for our purposes it will do.

The Night Lords were originally the subject of only one book, Lord of the Night (2005) by Simon Spurrier, which presented an alternate interpretation of their history where their Primarch and progenitor, the Night Haunter, was a highly focused individual who shunned the accolades that were heaped upon his peers. Instead, he prosecuted his own brutal kind of warfare precisely because none of the other Legions would and was loyal to the Emperor up until the end, even when his father had abandoned him. This interpretation, bolstered by the quality of the book, proved popular and enjoyed renewed interest with the release of Aaron Dembski-Bowden's Soul Hunter series, which includes, in narrative order, the short story Shadow Knight (2009), the novel Soul Hunter (2010), the audio drama Throne of Lies (2010), the novel Blood Reaver (2011), the short story The Core (2010), and finally the final novel Void Stalker (2012). They also have a number of works featuring and also centering on members of the Legion in the Horus Heresy series.

Advertisement:
open/close all folders
Lord of the Night (2005)

Lord of the Night contains the following tropes:

Tropes demonstrated by the Talos trilogy: