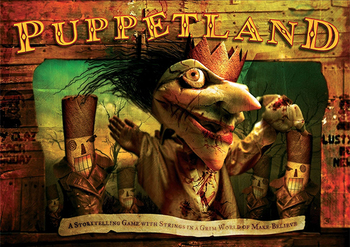 Puppetland is a Tabletop RPG by John Scott Tynes originally published in 1997, with an expanded version released thanks to crowdfunding in 2016 via Arc Dream Publishing.

In a grim fantasy world taken over by Punch after he killed The Maker, the players (taking on the role of different kinds of puppets) are brought together by Judy to rise up against Punch and his army of Nutcrackers (and various other monsters). The game has a particular focus on storytelling over mathematical rules, with three main rules in play:

1. An hour is golden, but it is not an hour. Although narrative time can vary depending on events, single sessions of Puppetland last exactly one hour of real-time. At the beginning of every session, the puppets are back home in bed (or wherever they happen to be staying).

2. What you say is what you say. Everything that comes out of the mouths of the players is in-character. The Puppetmaster (GM) handles the rest of the narration.

3. The tale grows in the telling, and is being told to someone not present. The players and the Puppetmaster should act as if they were presenting a puppet show to an imaginary audience.

The reprint can be found digitally on DriveThruRPG here

, or can be bought in hardback straight from the publisher here