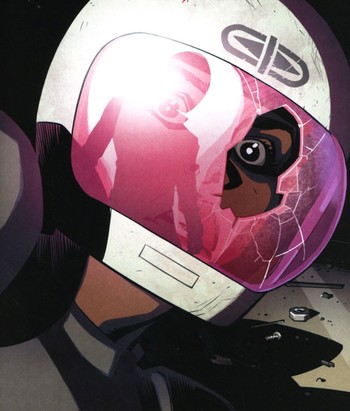 The betrayer is enraged
His mask is broke, his crimson hauberk cloven
His brains they are arrayed amongst the ruins of the lies he's spoken
— GWAR, Immortal Corruptor
Advertisement:

In some media, particularly science fiction media, armored characters will often have large plates covering their face. This could be anything from a large bubble helmet used in a conventional space suit, to a thin strip-like visor running across their eyes. Sometimes writers and artists need to show combat damage on suited characters, and one of the most visible and effective means of communicating that to the audience is by means of smashing, cracking, or putting a hole through the faceplate on their armor, suit, or mask.

This can be a very powerful image, as humans instinctively look to the face to gauge the state of another person's emotions, and even when that face is completely concealed behind a visor, the fact that the visor is damaged tends to communicate horrible damage quite quickly. This can also be a form of Gory Discretion Shot, as any damage severe enough to put a hole through a faceplate is likely to make a mess of the head it conceals, but the actual blood and gore need not be directly shown. See also Pretty Little Headshots. On the other hand, if the damage caused uncovers the character's face but does not cause head injury, that can also be a way of communicating to the audience that though the character is not dead, they are in serious danger. Tearing away their protection and revealing their face in the process will "humanize" an armored character to the audience, with all attendant human vulnerabilities that implies.

Note that though this trope seems most common to armored characters, it can apply to any character who conceals their face behind a mask. For example, a masked Super Hero who gets their mask partially torn off in battle would count as this trope, though one who deliberately takes the mask off would not.

Often a type of Armor-Piercing Attack, this is a non-fanservice Sub-Trope of Clothing Damage, and Sister Trope to Hat Damage if non-fatal. May invoke Ominous Crack where it's not fatal for added drama.

As is often a Death Trope, Spoilers may be unmarked ahead. Beware.