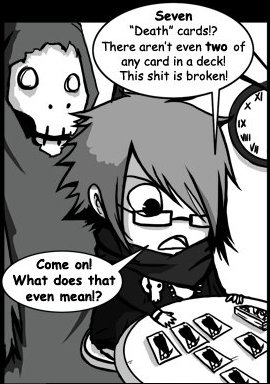 Actually, DO fear the reaper.
Client: Aren't there more cards than that in a Tarot deck?
Reader: Usually, but in a portentous moment you don't want "Three of Cups" or something. I got rid of everything except "Death" and "The Lovers".
— Oglaf, "Cartomancy"
Advertisement:

Originally created for European gambling games, the Tarot deck has now become almost synonymous with fortune telling and prophecy. For info on what the cards actually mean, see Tarot Cards.

But what is the point of all that? Isn't it more fun for a writer to use them to hint at terrible danger? After all, most people only know one Tarot card, Death, which makes an unambiguously sinister omen. As audiences grow more trope-savvy, writers instead use The Tower and/or The Hanged Man, which are often illustrated with alarming pictures, for the same purpose. note These make for good visual shorthand, but aren't quite true. The Death card means change, not literal death. One card, the Ten of Swords, does mean something like what people think Death means, and the Rider-Waite illustration shows a dead man with ten swords sticking out of his back. Given that it actually does signify bad things depending on its position, one wonders why nobody ever uses the Devil (Moral Guardians freaking out, perhaps?).

Common writer tricks with the Tarot include the introduction of new cards, duplication of existing cards (usually Death), or a "good" card appearing reversed, which the Tarot-reading character will explain means that the opposite will happen (i.e. another bad omen).

When themes are lifted from the Tarot but no actual reading takes place in the plot, that's Tarot Motifs. See also Portent of Doom for other ways an author can foretell danger for their characters.