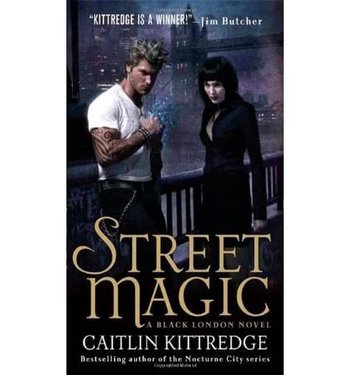 The Black London novels are a dark urban fantasy series by Caitlin Kittredge and tell the continuing adventures of a magic talented couple of supernatural troubleshooters in and around London.

Twelve years ago, young Pete Caldecott, smitten with her sister MG's boyfriend Jack Winter, lead singer of the Poor Dead Bastards and badass mage, followed him into a graveyard to help him with some magic. It went wrong. Badly, badly wrong. Jack was savaged by what he summoned. Pete ran, back to the Muggle world, finished school and went on to live a somewhat normal life, becoming a Detective Inspector at the tender age of 28, at the cost of her relationship.

After solving that case, the pair of them pretty much stay together, doing supernatural work for hire and protecting people from the dangers of The Black — the supernatural and magical atmosphere and denizens of the UK.