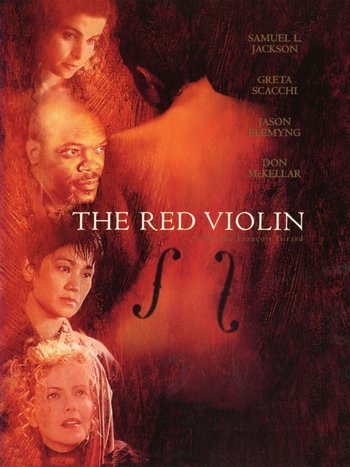 The Red Violin is a Historical Fiction/Speculative Fiction film following the story of an elusive, expertly crafted red violin with a Dark Secret.

The film starts with a luthier in Italy, a fastidious master who lovingly crafts a perfect instrument for his unborn son... and then marks it indelibly with an act of mad grief. Following the pattern laid down by five Tarot cards, the violin's journey takes it through Europe, Asia, and finally the New World. For four centuries it passes from owner to owner, haunting each with beautiful music and constant misfortune, and leaves a trail of triumph, obsession, hope, and misery in its wake.

Meanwhile, in the Future… an auction house in Montreal prepares to open bidding on the violin, now recognized as a priceless treasure. Over the course of the film, we gradually come to learn the connections that lead many of the attendees to seek the violin, and how many lives the instrument has affected for good or ill.

The Red Violin was produced by companies from Italy, Canada and the United Kingdom, and released by Lionsgate in 1998. It won the Academy Award for Best Original Score (composed by John Corigliano), and received/was nominated for many other awards for filmmaking and music, including a nomination for Best Foreign Language Film at the Golden Globes.

This film contain examples of: