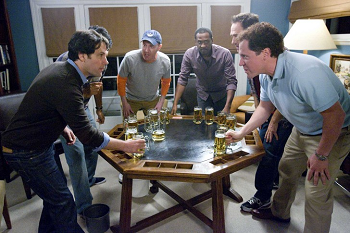 "I shall win. You haven't the liver or the stomach of a first-rate winebibber!"
— Duke of Clarence, Tower of London (1939 version)
Advertisement:

A competition to see who can hold his liquor better. In its simplest form, participants drink equal amounts simultaneously and whoever quits, vomits or passes out first, loses. Variants may involve periodic tests of skill, often with the loser obliged to perform some humiliating forfeit.

A Drinking Contest is typically dreaded by a character who Can't Hold His Liquor, and may be subject to exploitation by one who Never Gets Drunk. Compare Eating Contest.