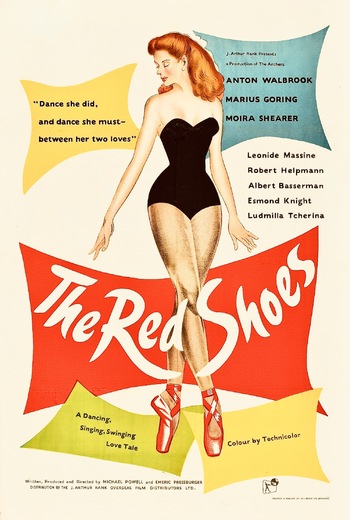 The Red Shoes is a 1948 British musical drama film written, produced and directed by Michael Powell and Emeric Pressburger, whose title and general motif derives from Hans Christian Andersen's tale of the same name.

Boris Lermontov (Anton Walbrook) is a demanding and highly respected ballet impressario whose company is hampered when its main prima ballerina (Ludmilla Tcherina) opts out for marriage, much to his displeasure. A talented dancer Victoria Page (Moira Shearer) and composer Julian Craster (Marius Goring) are signed on to his company, and he engages them as key collaborators in a new ballet based on the fairy tale The Red Shoes. Lermontov believes that this will be his masterpiece, and that Victoria Page could become his greatest dancer. However, his domineering nature and fear of losing another dancer, gets confirmed when he learns of Victoria's romance with Julian, creating conflict in the company, with Vicky being forced to choose between her career as an artist or her personal happiness with Julian, and finds herself unable to wholly devote herself to either.

The film was notable for having an ensemble cast of actual ballet performers and choreographers, including famous veterans of Sergei Diaghilev's Ballet Russes, namely Leonide Massine and Ludmilla Tcherina, as well as Moira Shearer, who had made a name for herself at the Royal Ballet School.