Grail in the Garbage 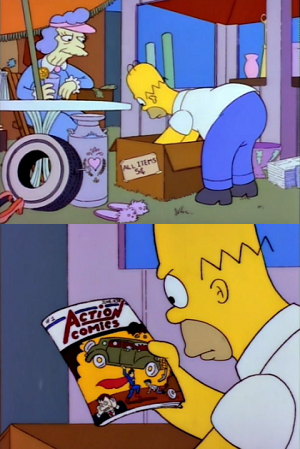 "Why is this priceless Superman comic 5 cents? If it's priceless, it should be free!"
"It's amazing to think one of the greatest mysteries of Equestria was solved with a musty old book from an antique shop."
— Starlight Glimmer, My Little Pony: Friendship Is Magic, "Shadow Play – Part 1"
Advertisement:

It's an artifact of earth-shaking power. Its value is immeasurable, its history is the stuff of legends. It's... being offered at a clearance price at the local thrift shop.

Sometimes, priceless things can be found in the most unlikely places. Maybe the previous owner didn't realize what he had, maybe some higher power put it there for a reason, maybe it's just one of those unique chance encounters. For whatever reason, it's being treated as far less valuable than it really is, and it's ripe for the picking by an unsuspecting hero. If this sort of thing is actually the bread and butter of the place in question, then it's a Bazaar of the Bizarre or The Little Shop That Wasn't There Yesterday.

Compare It May Help You on Your Quest, Worthless Yellow Rocks, Priceless Paperweight, Excalibur in the Rust, and Commonplace Rare.

See also Violin Scam, which is a form of The Con in which the Con Man makes the mark believe that the two of them have found a valuable item, when the item is actually worthless.